Early Chadron: Hollywood of the Plains?

More than a decade before the Academy of Motion Picture Arts & Sciences began staging Academy Award ceremonies in Hollywood, one of the earliest western films about Wild Bill Hickock was produced in…….Chadron, Nebraska? 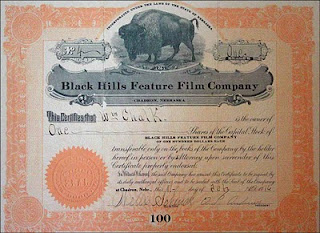 Not that the movie would have won an Oscar. According to the Nebraska State Historical Society, it wasn’t even close to being an accurate depiction of Wild Bill, but it was an ambitious undertaking for a group of local folks in Chadron who produced the film.

Entitled Wild Bill and Calamity Jane in the Days of ’75 and ’76, the 1916 movie was said to have embraced several “state of the art” production techniques, including film masking and titles within the film. Most intriguing for us was the fact that local citizens created the Black Hills Feature Film Company and sold stock in an effort to bankroll the project. We don’t know how many shares they sold, but one “William Chalk” was the proud owner of Certificate No. 4, shown here.

Interestingly, the certificate is signed by Willis Schenck, Secretary, and A. L. Andrews, President, of the Black Hills Feature Film Company – and Schenck also performed in the film. According to the credits, he played the role of “Nettie’s father.” 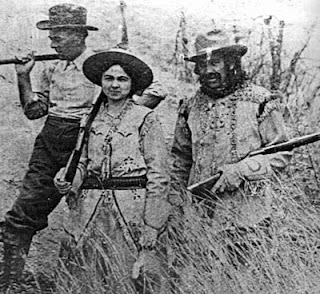 But the real limelight of this film was focused on a young lady by the name of Freeda Hartzell Romine, who – according to the Centennial History of Chadron, Nebraska (1985) – was born in Nebraska but grew up in Deadwood, South Dakota. That’s where, so the story goes, she learned to become an expert rifle shot and honed her skills well enough to appear in the 1904 World’s Fair in St. Louis with Will Rogers. She would have been only about 12 or 13 years old. The photo here shows Freeda with fellow performers in Wild Bill and Calamity Jane in the Days of '75 and '76.

The young lass also toured with Buffalo Bill Cody’s Western Show for several years, according to an account in Dawes County - The First 100 Years, published in 1985. She and her railroader husband, Guy Romine, had a daughter, Catherine. Many years later, the Romine’s divorced. Freeda reportedly lived for several more years in Chadron, but also had a home in Indiana. We know nothing about her final days.

Other "locals" in the film included Freeda's mother, Mary Hartzell, who portrayed Calamity's mother, and A.L. Johnson, who was cast as Wild Bill. Barney Efting played the infamous Jack McCall, while Dick Iaeger was Calamity's brother. In researching this local drama troupe, we discovered that Iaeger was an uncle to Karen (Kindig) Schlais, who still lives in Chadron.

Alas, this film – and the film company – were also lost in obscurity. Fortunately, the movie was finally “re-discovered” some years ago and placed in the Nebraska archives in Lincoln. It was dusted off and featured a few years ago by Nebraska Educational Television in their Next Exit series.

Enjoy this glimpse of film magic that is nearly 100 years old.
~