Take me back to the ball game

In the early 1950’s around Chadron – and lots of other communities, I suspect – town kids spent lots of time every summer on baseball diamonds.

That baseball was the American pastime there was no doubt. When we weren’t on the field playing Ward, Midget, or Junior Legion ball, we were gathering for afternoon scrimmages on any lot big enough to accommodate the game. One of our favorite spots was an empty field immediately east of what is now the Miller Building on the Chadron State College campus. These days, that field is occupied by the Reta King Library.

Occasionally, we’d retreat to backyards and improvise a bit with practice golf balls and makeshift bats. We called it “cotton ball,” although it was known by other names, too. Big city kids called it “stick ball.” I remember two types of balls used: one was a foam rubber sphere; the other was a hardened, perforated plastic ball. I preferred the foam rubber ball, which could be more easily manipulated for a wide range of strange pitches from exaggerated curves to drastic dropballs!

Summer evenings were especially fun when there was a Chadron Elks baseball game. The young men and old-timers who comprised this team in the 1950s was a diverse group of guys who shared one common love: baseball. That team deserves a separate story at a later time! From pre-game music over the speaker system to the public address announcing by Walter Hampton – summer fun was in the air, rich with the smell of freshly-popped popcorn - and baseball!

Perched on outfield fenceposts, we kids bided our time, waiting to retrieve the frequent foul balls or homeruns. This was not only a way to see the game – but we were also providing something of a service to team. After all, baseballs didn’t grow on trees, and the 10 cents reward for returned balls could net an industrious kid a buck or two! Few kids who were as adept at chasing and finding foul balls as Kenny Connors, a Prepster whose achievements in the realm of foul-ball chasing were almost legendary. As he confided to me some decades later, it was also a way to occasionally replenish one’s own supply of baseballs. After all, we had to have something to play with when we gathered for our afternoon games. 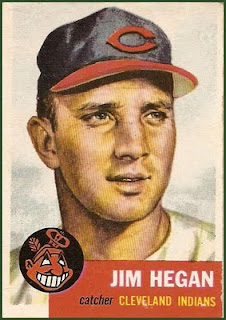 Another baseball-related cottage industry that kept us off the streets and out of trouble, usually, was collecting and trading baseball cards. Of course, this was a hobby in which anyone could participate, and it was great fun. These were chewing gum cards -- popular long after the tobacco card collectibles of the early 1900s.

I was fortunate enough to team up with Lawrence (Larry) Denton, an older friend, who was a savvy collector and shrewd enough to effectively negotiate the swapping of two Bob Keegan cards for a more valuable Jim Hegan card.

Our big year in the baseball card game was 1953. I was 10 years old. Lawrence and I had bought lots of Topps chewing gum at the Newsy Nook that summer, parlaying a formidable inventory of cards. For each 5 cent-package, the purchaser got five cards – and some really bad gum. Those were the days before parents and merchandisers got into the game, selling and buying entire collections in one fell swoop – snatching from kids the joy we found in collecting and trading cards.

Like so many other things in life, new generation parents want their kids to have everything now, rather than working for it over time. Is it any wonder we’ve seen a whole generation of kids grow up who want and expect to buy a new home while still in their 20s!

With the promise that I would never sell or give away the fruits of our 1953 labors, I kept our card collection neatly tucked away in a cigar box (probably belonging to an old Denton family boarder named Jim York) for decades. In recent years, I’ve moved the cards to a binder that allows me to occasionally revel in the collection, remembering the many happy hours we spent buying, selling, and swapping cards. But our collection is still not complete.
Anybody have a #46 Johnny Klippstein?