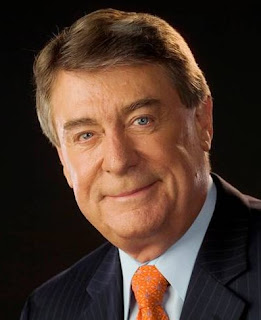 Charley Rook says he was “very, very lucky” during his career as a radio and television news director and anchorman.  But he also credits his upbringing in Chadron with helping him make the most of the opportunities that were afforded to him.
Rook is a 1954 graduate of Chadron Prep.  He was back “home” during Fur Trade Days in July, renewing acquaintances with friends and also taking stock of the town that he said he’s come to appreciate more and more while working and living in much larger cities.
“A lot can be said for growing up in a place like Chadron,” Rook said while sipping on iced tea at the Country Kitchen. “This is a place where God and Country are important, where honesty and fairness are appreciated and where a strong work ethic is learned and carried out.  I tried to live by those values because I really never knew any other way.”
Charley and his brother Johnny were born in Ohio, but their family moved to Chadron when they were in junior high. Their father, Gordon, was a Chadron native who was a diesel locomotive-electrician for the Chicago and North Western Railroad.  Their mother, Della, was a native of Kentucky. Johnny graduated from Prep in 1955, one year after Charley.
Charley notes that he wasn’t a good enough basketball player to get much playing time on any of the three Class C state championship teams that Archie Conn coached during the 1950s, but he liked football and believes he received all-Northwest Nebraska Conference honors as an end on the Junior Eagles’ football team his senior year.
Both brothers made it big in broadcasting—Johnny in radio while Charley switched to television and was an anchorman at major stations in both Chicago and Los Angeles before spending 20 years at a station in Spokane-Coeur d' Alene, where he is now retired.
Early in their careers, both worked at KOBH Radio in Hot Springs where they “did about everything.”  While Charley made his mark as a radio and TV news anchor, Johnny had a knack for picking hot tunes before they were hits and he became a renowned radio programmer and station consultant.  Wikipedia has three pages on Johnny’s career. He lives in Coeur d’ Alene, Idaho, only about 20 miles from Spokane. (See separate story).
Charley has no regrets about how things turned out for him, and while he was being  interviewed, mentioned two things that he feels helped put him on the  road to success.
One, he said, was at the District 6 Declamatory and One-Act Play Contest that Chadron State College hosted when he was a junior at Chadron Prep.  The competition included radio newscasting and Charley won first place, sparking his interest in broadcasting and boosting his confidence.
The second was being able to work for his uncle Claude (Bud) Rook, the founder and owner of ABC Electric in Chadron during the summers and at other times when an extra helper was needed.
“I’m sure there are some people in Chadron who remember him,” Charley said. “He was a good mentor for me. He was a taskmaster who had that work ethic which I so much admire to this day. Bud also believed if you worked harder than the competition  you could succeed in America, the greatest country the world has ever seen.
“Quite a bit of this rubbed off on me and I still believe it, even though things about this country have really changed over the years and in my estimation, not always for the better.  The nanny state and political correctness come to mind."
Charley said some of “Uncle Bud’s training” helped him excel while he spent four years in the Navy immediately after graduating from Prep.  First of all, because of his experience as an electrician in the ABC Electric shop, Charley became a shipboard electrician on destroyer escorts in both the Atlantic and Pacific Oceans. By the time he was discharged, he had an E-6 rating, something few sailors accomplish during a four-year hitch.
“I made E-6 because I studied hard for the tests that we took.  I was told that if I stayed in the Navy I could probably become an officer. It was tempting, but I decided if I could do well in the Navy, I could probably also do well in the outside world so I got out.”
After his discharge, Charley enrolled at Chadron State College in the fall of 1958, but stayed just one semester and part of the spring term. Johnny was working at KOBH and the Hot Springs station needed a weekend announcer.  Charley took the job and was soon hooked on radio broadcasting.
Since the name Johnny Rook was already well-known to KOBH listeners when Charley went to work there, it was decided he should use a different last name.  Thus during the rest of his career—nearly 50 years—he was Charles Rowe to his listeners and viewers.
After only a few months at KOBH, he accepted a radio position  in Cheyenne. He said he definitely got lots of experience there.  He put the station on the air in the mornings, was often still there to give the noon news and then spent the afternoons selling spots, or ads.
His stint in Cheyenne was cut short when some "high rollers" from San Francisco hired him to help build and set up programming for four new Northwest radio stations in Boise, Idaho, and Salem, Eugene and Medford, Ore.

His next stop, still in the early-1960s, was at KYMN, a 50,000-watt station in Portland, Ore., where he was strictly a newsman. He was there a couple of years and enjoyed his work but realized television people were making more money.
Rook took a chance and in 1966 accepted a newscaster job at a tiny TV station in Coos Bay, Ore.  Within six months, he was promoted to the company's flagship station in Eugene as news director and anchor.
Then just a few months later in 1967, he received a big break in his career.  He was offered a news anchor and capitol correspondent position at KXTV in Sacramento. That was shortly after Ronald Reagan was elected governor of California. 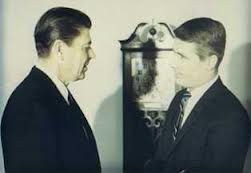 “It was my pleasure to interview him three times in the two years I was at that station,” Charlie said. “He was great to interview and I was one of his admirers long before he became president.”

Charley said he was not planning to leave Sacramento, but he went to Chicago in 1969 to visit his brother and his mother, who had moved with Johnny to the Windy City.
“By then, Johnny was programming WLS Radio, a top Chicago station, and really making a name for himself.  While I was there, he lined up an interview for me with WLS-TV, which was owned by ABC. They offered me the job of anchoring their first-ever weekend newscast and filling in for their weekday anchors.  The pay was very good, so I left Sacramento and moved to Chicago.”
Charley remained at WLS-TV for four years.  During two of those years, he also wrote and delivered three newscasts a day for the ABC radio network nationwide.
One of his most memorable experiences in Chicago was working in the same office area as Paul Harvey, one of the nation’s preeminent newscasters for nearly five decades.
“He would sometimes walk by my glass door, see me inside, open it and say ‘Hi Charles’ as he was leaving from work.
“Sometimes, I’d go down the hall and watch him do his newscasts. He had the darnedest system. He had papers scattered all over his desk and would randomly pick one up and read it with that great voice of his. I never could figure out how he decided which story to use next.  It never seemed that he had the stories in any kind of an order, but it worked for him.”
Charley said he was “never enamored” with Chicago, calling it “a corrupt city that’s still that way.” So when his contract ended he moved to KTTV, a major independent station in Los Angeles, and soon became its sole news anchor. KTTV is now owned by FOX.
“I was there for eight years and had a great time,” he said. “I guess this was the ‘biggest job’ I ever had when it came to audience size.  But after a while, I began dreaming about having my own radio station, so in 1980 I moved again.  While in LA, I worked hard to obtain a permit to put a new FM station on the air in Lincoln City/Newport, Ore., right on the coast.
“Building and managing the station was probably the most fun thing I have ever done and we put a superior product on the air. We won more than a dozen Associated Press statewide awards and a couple of national awards for our news coverage.  But I realized while I was having great fun, I wasn't making much money.   So I sold it and began looking for a television news position in the Northwest.”
Charley didn’t get much time off after selling the station.  Within a few weeks he was hired as an anchor at KREM-TV in Spokane, Wash., and spent the last 20 years of his career there.
“Our ratings were top notch and I enjoyed the staff at the station, even though I had a constant battle with some of the activist-liberals in the newsroom to make sure we were telling both sides of the story. Maybe that's why the 5 p.m. news at KREM, which I co-anchored for the full 20-years, was constantly number one. I finally retired when I reached 72 and that was five years ago.
“I had a good career and I don’t have any complaints. I always enjoyed preparing myself for the job on a daily basis and then getting it done.” he added.
He remains in Spokane after retiring and calls himself “a neighborhood volunteer" who is heavy into the Tea Party, Heritage Foundation and the National Rifle Association.
He said he’s dismayed that the national media is so biased to the left and he tries to do what he can to maintain and promote the conservative viewpoint.
Along the same lines, he said he greatly enjoyed his visit to Chadron and the chance to meet up with a number of his high school friends again.  Most of them, he noted, seem to be holding on to what he describes as “this country’s traditional values of honesty and hard work.”


(Thanks to good friend Con Marshall for sharing this story, originally written for the Chadron  Record)