Take me out to the ball game!

As the spring training Cactus League winds down in the area and major league baseball teams prepare to swing in to action for the regular season, a group of a dozen or so Chadron folks found themselves at Nando’s Mexican restaurant in Chandler for a get-together.

Now, that’s not unusual.  There’ve been gatherings of  former Chadron residents and “Snowbirds” in Arizona for many years  It’s always fun to swap stories about and get reacquainted with good friends from the past.

But we thought this one was special.  Especially for those of us who played “Ward” baseball back in the 1950’s.

Larry and Cheryl (Haskell) Moody now make their home in , and they brought to this gathering an artifact from the past that intrigued many of us.

It was an “Official Little League” Spalding baseball with the following inscription:  “To Mr. K. Moody from Fourth Ward ‘Champs’ ‘54”    And scribbled all around the ball were the names of those proud youngsters of south Chadron who played our version of Little League baseball that year in Chadron.

“K. Moody,” of course, was Kenny Moody, whom many will remember as a long-time resident who was a staunch enthusiast for youth sports activities in Chadron for decades. And in the summer of 1954, he was a coach/manager for the Fourth Ward team.  As we recalled, that was a team sponsored by the Rotarians.  Ward One was sponsored by the Lions Club, and Ward Three by Kiwanis.  (Our memory of the Ward Three sponsor is MIA!)

Kenny and his wife, Wanda, moved to many years ago and are now both deceased.  Interestingly, three of their four children – Larry, Rebecca, and Lynn – also sought warmer climes and now live in the area.  The eldest, Nancy, still lives in Chadron.

Spring training baseball games in “The Valley” of have always been popular – and it’s increasingly big business.  We attended a game here about 10 years ago and found it reminiscent of going to a Chadron Elks baseball game back in the ‘50s.  There were larger crowds here, of course, and the quality of play was a step up – but only a bit!

Today, tens of millions of dollars have been poured in to new ball fields and training facilities in the Phoenix area, accompanied by ticket prices that have escalated to a level out of range for lots of folks.  Nonetheless, they still seem to fill the stadiums here with record crowds.

But our baseball “fix” this year didn't come from a Major League game.  It came in the form of an autographed Little League baseball from a half century ago in Chadron, Nebraska.

This event was a Grand Slam!

Sandhills brothers left legacies for all of us

(NOTE:  Many thanks to Con Marshall for his assistance in providing much of the information contained in this story.) 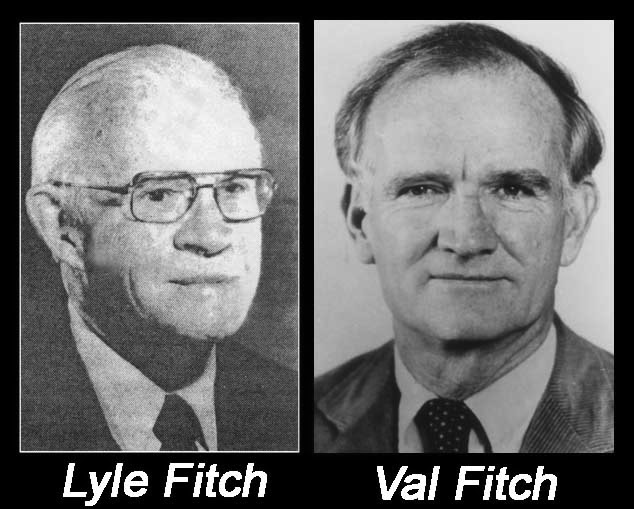 While “Fitch” is not exactly a household name, it’s one that gained considerable prominence across the country and around the world over the past several decades.

The Fitch brothers were products of the sandhills – and they both attended Chadron State College, as did their sister, Helen.

Their story, of course, started many years earlier – at about the beginning of the 20th century – when their grandfather, Peter Fitch and his wife Minerva, sold their rural home near Valley, Nebraska (Madison County) and moved to the open grasslands of northwest Cherry County.  The Fitch family had lived in since the time of the Civil War, so it was likely a big change for them, striking out for the wide-open Sandhills.  It was there, not far from Merriman, that Peter bought a cattle ranch.  By the time the federal census was taken in 1910, there were six children in the Fitch family.  The oldest was 19-year-old Fred.

In about 1912 or 1913, Fred Fitch married Frances Logsdon, a teacher, and they would continue the Fitch ranching operation, raising purebred Herefords on their ranch about  five miles northwest of Merriman.  With the coming of World War I, Fred registered for the draft.  By then, the summer of 1917, Fred and Frances Fitch had two children:  3-year-old Lyle and an infant daughter, Helen. Lyle and Helen would start their education in a nearby one-room country schoolhouse.

Then, on March 10, 1923, Val was born.  But before he was old enough to start school, Val’s father, Fred, was involved in a horse accident that would lead the family to move in to Merriman, where the children would enroll in the town school.

Their stay in Merriman was cut short.  Within three years the family relocated again, this time to Gordon, where Fred became a general insurance agent, bought a home and made a decent living for his family.

The Fitch brothers story, to that point, was not a particularly remarkable tale, apart from the resiliency the family demonstrated when faced with some life-changing incidents.

But whatever the challenges, the Fitch boys seemed more than prepared.

The Lincoln Journal-Star has written about 12 little-known Nebraska towns.
See how many of them you know -- or maybe have actually visited!
CLICK HERE

We were familiar half of the communities -- and actually have visited some of them.  Of course, there were a few we'd never heard of.  But we suspect that many Omaha and Lincoln-area residents haven't heard of Marsland or Antioch, or numerous other tiny panhandle settlements -- some of which today would likely be considered "ghost" towns.

Information about these little-known towns was gleaned from what's called the Virtual Nebraska project, which "emerged out of the Consortium for the Application of Space Data to Education (CASDE) project, which began in September 1995, after Senator Bob Kerrey challenged personnel of the Jet Propulsion Laboratory (JPL) to find a better way to apply NASA's space data holdings to education."

The site was created by the University of Nebraska-Lincoln. It offers a wealth of information, including Landsat satellite photos, color infra-red images, educational modules, tutorials, and much more. 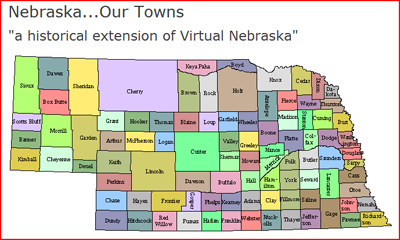 One of those components is Nebraska -- Our Towns. It deals with historical information about cities and towns all across the state, searchable by county and/or town name.  A few years back we contributed a bit about Whitney to the Our Towns database in the form of a link pointing to our Whitney Reflections website.

As you explore Our Towns and read through information about Chadron, Whitney, Crawford, Marsland, and other communities in Dawes County and Nebraska, you'll probably find that the information is far from comprehensive, and there is likely information that needs to be better documented.

Nonetheless, we found Virtual Nebraska to be not only an enjoyable diversion for learning about Nebraska communities, it also contains a real abundance of information that any Nebraska should find interesting and helpful.