With a tip of the hat to Chris Fankhauser at KCSR, we're able to add a bit of information to our earlier posting about H. F. Maika, who operated a drug store in the early days of Chadron.
Chris recently sent me the following note:
...Henry F. Maika operated HF Maika Drug Store at 117 W. 2nd Street in Chadron beginning in 1912. Mr. Maika passed away in April of 1934, and his wife, Minerva, operated the drug store after that. She passed away in March of 1955. Sometime prior to her death, she allowed someone else to operate the drug store, and it was called Olsen Drug, and then in 1946, Henry Freed purchased the property, and added it to his existing furniture store, which was in operation in Chadron for many years. Hope this helps fill in the gaps. Also, the Maikas came from Rock Falls, IL.

Brother John recently sent me a few old issues of the Chadron Record, and that's where I found a January 9, 1964 story about Dennis Armstrong, pastor of the Church of Christ (Christian) Church in Chadron in the early 1960s.
Although I didn't remember it at the time, I subsequently recalled that Dennis had married Mabelle Maika. The 1964 story in the Record indicated that the Armstrongs were off to Norfolk, Nebraska where he intended to enroll at Nebraska Christian College. I suspect Mabelle Armstrong could provide much information about the old Maika Drug Store in Chadron.

Even small high plains communities like Chadron, Goodland, Torrington, and Winner had drugstores with soda fountains in the mid-20th century. It was a place where folks could not only get their prescriptions filled, they could also enjoy a cup of coffee, a Coca-Cola, or perhaps even a sandwich – all from the “soda fountain." 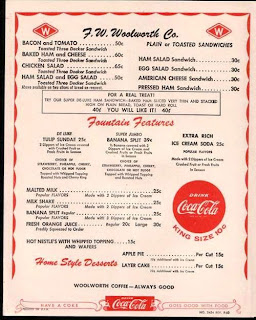 If you happened to live in a somewhat larger community, like Rapid City, Cheyenne, North Platte, Alliance, or Hays, you might have had access to an F.W. Woolworth store. It was a place we rural kids seldom had a chance to visit, but it was a pretty cool place with lots of “stuff” and a lunch counter that far surpassed the limited number of grilled items you could buy at the corner drugstore.

When a friend sent the Woolworth menu shown here, it immediately brought back memories of the three drugstores I remember in Chadron during the 1950s, all of them on the west side of the 200 block of Main Street.

Perhaps the most popular and successful was Saults Drug, owned Joe Saults. By the time it moved from the corner of 2nd and Main to a new building on the corner of 3rd and Main, “Saults Corner Drug” carried a wide array of merchandise, including greeting cards and gift items. While the pharmacy remained the nucleus of the business, teenagers continued to gravitate to the soda fountain. Interestingly, Joe Saults had relatives in Gordon who operated another Saults Drug, which for many years was every bit as successful as Joe’s operation in Chadron – perhaps moreso.

Least popular of the drugstores – at least for teens – was Thompson Drug, just a few doors north from Highway 20 on the west side of Main. Operated by "Tope" Thompson, I remember Thompson Drug as smaller than either Service Drug or Saults Drug, but it, too, carried retail merchandise and had a soda fountain in the back. For some of us, it was the place to order Green River drinks, a lemon-lime concoction that seemed to be a fountain specialty. Some years later, I was surprised to read in the Chadron, Nebraska Centennial History that "Tope" Thompson had been a “high muckamuck” in the Nebraska Ku Klux Klan back in the 1920s.

Service Drug was another hangout for teens and was operated by Paul Kampfe for many years. By the 1960s, Thompson Drug had gone out of business and only Service Drug and Saults Drug remained for several years.

Soda fountains intended for “real” customers were often overtaken by teens after school and on weekends. It was probably a mixed blessing for drugstore owners, and they eventually did away with soda fountains. I doubt they ever generated any real profit for the store and eventually became too much trouble.

My source of Green Rivers is gone forever!