The monster of Alkali Lake


As a kid, hiking through the pine hills just south of Chadron, my buddies and I would sometimes play "war."  An imaginary enemy would be lurking somewhere near Paradise Valley or perhaps back near Blue Rock Cave.

From atop King's Chair rock, we could survey the countryside for friend or foe.

Occasionally, our hyperactive imaginations would choose battling monsters over mere mortals.  We sometimes spent our time stalking -- or being stalked by -- a sabre-tooth tiger, a giant lynx, or some other heinous beast too frightening to describe!

So, it was with a bit of amusement and nostalgia to learn that even grown-ups of bygone days liked to engage in a bit of fantasy.

This item comes courtesy of the Nebraska State Historical Society.  Although it's not a Dawes County story, I suspect many northwest Nebraskans have driven the back roads of Sheridan County, oblivous to the danger that lurked nearby.  I feel somewhat cheated to have missed ever trying to pursue the beast in my younger days.

During the early 1920's, Alkali Lake near Gordon was the reputed residence of a sea monster. Reports of the giant creature said, "Its head was like an oil barrel, shiny black in the moonlight."

"When it rears and flips its powerful tail, the farmers are made seasick." "It eats a dozen calves when it comes ashore and flattens the cornfields." An Omaha man who saw the creature said, "the monster was 300 feet long and its mouth large enough to hold the Woodmen of the World Building."

In 1923, the Hay Springs News called for an investigation of the lake, proposing to drag the lake and capture the monster. A few months later, the paper reported, "The Hay Springs Investigating Association has, after due consideration, practically given up the idea of dragging the Lake in an effort to locate the monster. Land owners want 4,000 dollars for three mont's lease, and certain percent of exhibition money if the animal is found. Considered excessive, the Association concluded to go no further."

Newspaperman John Maher, known for his hoaxes, was probably responsible for this tall tale, too.

Rising from the rails: Crawford, Nebraska

The rugged buttes overlooking the meandering White River in western Dawes County saw more than just a few hostilities between white settlers and the indigenous Sioux tribes in the 1870s.

In 1873, the old Red Cloud Agency was relocated from along the North Platte River to a site near the pine-speckled buttes above White River.  The U.S. government authorized creation of a military post at the new agency site the following year.

Originally known as Camp Robinson, it was renamed Fort Robinson in January of 1878 in honor of Lt. Levi Robinson, who'd been killed earlier by hostile Indians.  Fort Robinson  played a key role in the so-called "Sioux Wars."  It was there that Chief Crazy Horse  surrendered in May of 1877, and it would continue to play an important role in efforts to maintain some tranquility in the region for several years.

That fact was not lost upon local and regional businessmen who also observed that the Fremont, Elkhorn, and Missouri Valley Railroad was extending into western Dawes County in the Spring of 1886.  A new maintenance roundhouse had been built by FE&MV the previous year in Chadron.  Establishing this rail route to serve the fort offered great opportunities for those quick enough to take advantage of it.

According to the Nebraska State Historical Society, Omaha Bee correspondent  William Edwards Annin and his brother-in-law Benjamin Paddock had partnered some years earlier to conduct business at the agency.  And the two apparently had acquired land in the vicinity of Fort Robinson -- land that was then purchased by the railroad.

In June of 1886, Annin would write in the Bee that the newly platted town of Crawford, "has already put on the airs of an old settlement.  Four thousand dollars worth of lots were sold the first day and the purchasers are now busily at work erecting buildings.  Thirty business houses are already on the ground and nearly as many more are said to be on the road coming to locate."

"Fort Robinson lies only three and one-half miles distant, and a large trade with its garrison is reasonably expected by the merchants.  The purchasers of the lots promptly saw that the nearer they could locate to the military post the better for their business...five weeks from now will see a well built up street, and a bustling town, where three days ago not a house was visible," wrote Annin.

These entrepreneurs, and the railroad that bought their wares to the county, are memorialized by streets named for them:  Annin, Paddock. and Fremont.  In nearby Whitney, adjacent parallel streets still carry the names, Fremont, Elkhorn, and Missouri.  The street nestled along the north side of the seldom-used rail tracks is names -- appropriately -- Railroad Street.

60 years ago at Chadron High School 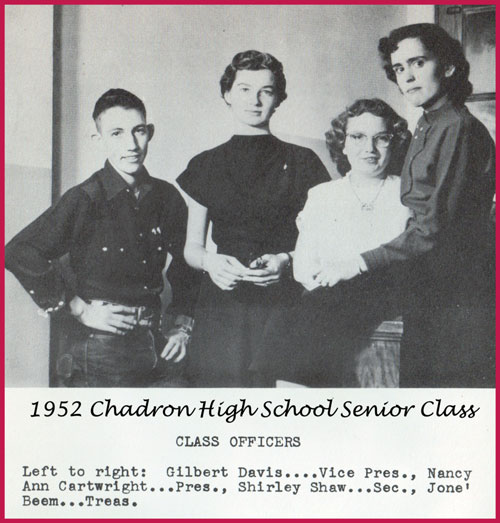