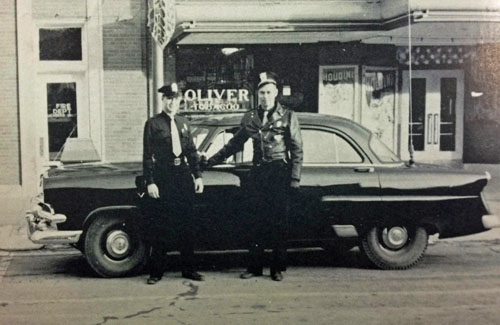 
"Ike" was our new president, having defeated Adlai Stevenson by a landslide in November 1952, and Russian Premier Joseph Stalin died the following March.  And while a truce was signed that summer to stop the fighting in Korea, it seems we're still beleaguered by continuing confrontations with the North Koreans.

But back in Chadron (just down the road about 14 miles each of Whitney, the capital of "Greater Nebraska) things seemed to be under control.  The Chief of Police in those days was Vernon Storey;  I believe he's the fellow on the right in the photo above.   Not sure about the officer on the left.

Police headquarters was just behind the fire truck bay at the left in this photo.  The police seemed to always have one of their "cruisers" parked in front of Oliver's Tobacco shop, which was nudged in next to the Pace Theatre.   The cop car seemed always ready for a quick departure, if needed.

The movie posters indicate that "Houdini," starring Tony Curtis, was playing at the theatre.  I remember watching that movie at the Pace, and I was impressed with Harry Houdini's ability to escape from just about any place.  Had he ever spent time in the dank, dark Chadron city jail in the basement of the "Municipal Building," I reckon he would have been out in short order.  The building housed not only the jail, Police Department and Fire Department, but almost all city offices.

This image brings back memories of the Chadron Junior Police Department.  Alas, I don't think it lasted very long, but for youngsters old enough to belong, it was probably a cool gig.

The photo also creates more questions.  Like, who was Chief of Police just before Storey?  Was it Butch Foster?  When did Robert Beers become Chief?  And was tabaccoonist Hugh Oliver really a retired Navy Chief Petty Officer?

Kenwood School was a welcome addition to Chadron

Chadron has long been recognized as the "educational hub" of the Nebraska panhandle, dating back to 1911 with the establishing of a State Normal School on the south edge of town.  Ten years later, residents on the other side of the community – north of the railroad tracks – would also take a big step forward in education.

There long had been a need for an elementary school in the Kenwood addition of town, and in 1921 construction started on a fine brick building with eight classrooms.  Until that time, classes for Second Ward students had been conducted in a building at the Dawes County Fairgrounds.

Classes in the new building started in 1922, the same year that a new high school building was constructed at 6th and Ann.  While touted as a "Junior-Senior High School," the three-story brick building on Ann Street included a basement and also accommodated East Ward elementary students.  The bill for both buildings was reportedly $250,000.


And with the addition of a "West Ward School" adjacent to U.S. Highway 20 on the west side of Chadron, the community had three public elementary schools.

While doing a bit of research this week, we happened across a 1931 CHS Milestone, as the yearbook was called in those days, and found a few interesting facts and photos.

Here's a sampling:  a composite photograph of the three ladies who served as principals at the three elementary schools.  All were graduates of "Chadron State Teachers' College."  Left-to-right below, they are:


Of course, the real stars of the yearbook are the kids.  We found one of the most intriguing photos to be of the Kenwood Kindergarten Class.  It was fairly typical of all the elementary photos, in that most of the kids look like they'd much rather be anywhere else.  Nonetheless, we did see one young chap who appeared to have at least a faint smile on his face! 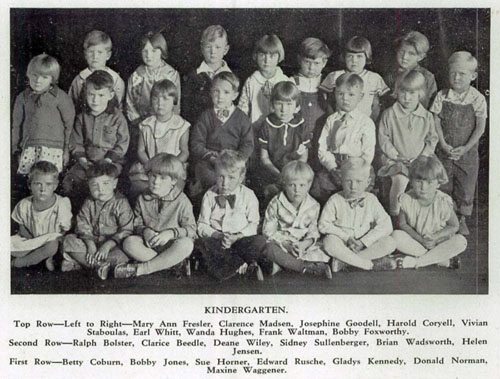 We invite you to visit our Schools Gallery if you'd like to get a closer look at this and other images at school kids!