Bill Finch was a 'King of Swing' 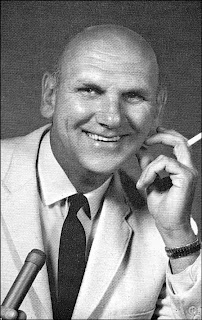 Bill Finch loved music. But it was broadcasting where he left his mark.

A native of , Finch was deeply rooted in the music and culture that he had grown up with in the 1930’s and ‘40s.

He also had a knack for new technologies and ventured into broadcasting – first radio, and then television. But television was a mere flirtation, and he molded his lifelong career around radio, sharing his love of big band music with radio audiences from and to – and around the world.

It’s no surprise that he was blending those two traits when he partnered with Coloradan Bob Fouse to put Chadron radio station KCSR on the air back in May of 1954. That event was listed among “New Beginnings” in the recently-published history of Chadron, Nebraska, prepared as part of the quasquicentennial celebration this summer.

Few folks with first-hand knowledge about the beginning of KCSR are still around. So it’s left to those of us who were mere youngsters romping around Chadron in the mid 1950’s to tell the story. And that story can’t be told without first knowing about the people who made it happen – and Bill Finch was in the thick of it!

Born in , , in 1922, Finch was just a few months old when his parents moved to . In later life, he told newspaper writer Thom Anderson that life as a big-city kid was pretty exciting. He said he remembered the St. Valentine’s Day Massacre, which took place not far from his house – as was the Biograph Theatre, were gangster John Dillinger was killed.

“The gangsters were often looked at as sort of folk heroes…we didn’t worry about them, though. They were never a real danger to citizens – only to each other when one invaded the other’s turf. The police figured they’d just kill each other,” Finch was quoted as saying.

He also remembered with great delight the wide array of big bands that would play in the many ballrooms around – from Glenn Miller and Guy Lombardo to Duke Ellington and Benny Goodman.

“Being raised in the Big Band era was the best thing a person who was musically inclined could possibly experience,” he was once quoted as saying. Those inclinations led him to master the saxophone and clarinet.

During World War II, Finch served a stint in the Pacific with the U.S. Army Signal Corps. His four-year hitch included an assignment to Special Services and ended in , where he was a courier with the Army Security Agency. After his discharge as a First Lieutenant, he enrolled in the broadcasting program at , where he graduated in 1951. Then it was off to his first radio job at KRAI in , where he was Sales Manager and also handled announcing chores.

It was likely in , however, that Bill Finch crossed paths with Bob Fouse, an announcer and Promotion Manager at KTLN in . It was fortuitous that Fouse’s family was apparently quite wealthy. Finch and Fouse joined forces in the early 1950’s and decided to build a radio station in . The station went on the air in May of 1954 from studios at 212 Bordeaux Street, just a few doors north of where the station is now located.

Much could be written about those early days of KCSR, which operated at 1450 Kilocycles with only 250 watts. Nonetheless, the station boasted that it was the “Tri-State Voice by Listener Choice,” but the signal struggled to reliably serve an audience in – let alone , which was even farther away.

But everywhere the signal could be heard, the station was a hit!

Early KCSR staff members included other DU alums like Cliff Pike and Freeman Hover. They were creative and resourceful, and they didn’t hesitate to take chances trying new things. The station was on the air 18-hours a day and incorporated everything from country and western to classical music in a format that was “keyed to the mood of the day.” But it was the local news, sports, and weather that caught the fancy of a Chadron-area audience hungry for their own radio station. They loved it.

Other early staff included Dave Scherling, who had been at KGOS in , and local Chadronites Ted Turpin and Sherry Girmann. Turpin did news and sports. Girmann was receptionist and stenographer.

Finch served as Station Manager and guided most of the technical work, while Fouse was Commercial Manager. Both did on-air work, but Fouse dove full force into programming, injecting his rare brand of creativity that was showcased on a weekday morning program called Breakfast with the Boys. We have a some photographs from this era; you'll find them posted in our KCSR Gallery. 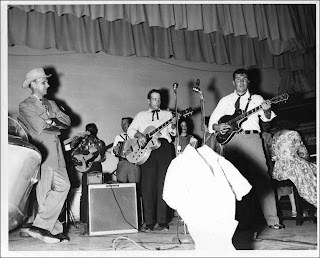 Finch and his wife othy became well-known in the community; their children Barbara and Ron enrolled in the Chadron public school system. Finch had a flair for showmanship, too, creating and hosting a weekly live performance program called “Curly’s Corral,” featuring area country and western musicians. “Curly” Finch became something of a celebrity, donning western outfits (at left) and even riding a horse down in a parade. Quite a trick for a guy who grew up in ! But he knew the importance of country music to station listeners, and he responded in a positive way.

In 1958, as a part-time announcer at the station, I vividly recall one summer afternoon when Bill was at the control board hosting an afternoon of recorded music. He decided to spice it up a bit by playing Count Basie's “One O’clock Jump,” followed by another version of....“One O’clock Jump”......and then..... yet another version! I have no recollection of just how many renditions he found, but he was loving every minute of it. It was clear he had a passion for big band music – even if it was demonstrated in a rather unorthodox way! He was, after all, the boss!

By late 1958 and early 1959, Finch was simultaneously managing KDUH-TV in Hay Springs, the new television station owned by Duhamel Broadcasting Enterprises. Whatever the motivation for Finch and Fouse, they sold KCSR to the Huse Publishing Company of . The deal was done in August 1959, and Finch was gone from Chadron.

Finch then bought a radio station in , but it became a tumultuous time for him and his family. He was soon divorced from othy and lost the station, taking a job at WFTL in .

By 1963, Bill Finch met magazine editor , and they wed on New Year’s Day in 1964, soon re-locating to , where he was again involved in broadcasting. But the lure of the Rockies took hold, and Bill and Pat moved to , where – among other things – he hosted a weekend big band program called The Finch Bandwagon on KVOR.

The program was heard by an Air Force colonel who had some clout with higher brass, and Finch was asked to produce the program for the worldwide audience of the Armed Forces Radio and Television Service. He’d periodically fly to and record as many as 13 programs in one trip. 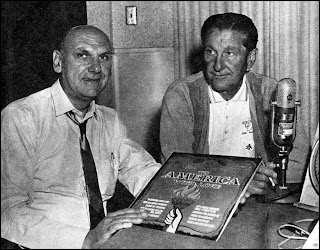 This phase of Bill Finch’s career accomplished several things. First, it gave him an opportunity to invite top-name talent to the studio for interviews that could be inserted into his programs, which were pressed to LP discs and distributed to AFRTS station and ships around the globe.

Surely, it must have been a real kick for the kid from to rub shoulders with top entertainers, ranging from musicians like Percy Faith, Patti Page, Stan Kenton, Frankie Carle and Lawrence Welk (shown here with Bill Finch), to legendary writers like Jimmie McHugh and Sammy Cahn, to name just a few. Second, as an ex-GI, Finch relished being able to share music that he had grown up with and loved with a whole new generation of American kids – not to mention the large “shadow” audience that tuned in AFRTS in every part of the world.

Bill and Pat Finch had a son of their own, Holmes, who spent his formative years in .

The AFRTS gig went on for more than a decade, but – according to a 2002 news story – Finch lost is voice and had to undergo surgery on his vocal chords. While he regained his voice, it was markedly different, and Finch apparently felt that his tenure as a radio announcer was at an end.

Shortly thereafter, the family headed east – to . They settled in Pamplico, where Pat had grown up. 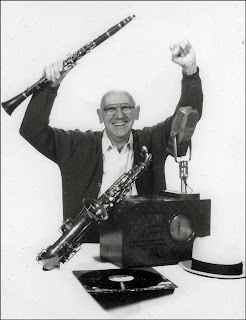 In 1975, the final chapter of Bill Finch’s broadcast career unfolded. He went to work at WJMX in nearby and resurrected the Finch Bandwagon radio show. It thrived and became something of a fixture on the station, running steadily for 27 years. At the end of that long stint on radio station WJMX, writer Stella Miller dubbed Finch the 'King of Swing' in an article for Golden Life magazine.

Finch's first wife, Dorothy, suffered a bout of heart ailments and passed away in 1995 in Orlando, Florida. Their daughter Barbara lives in where her husband is project manager for a construction company. They have five children, 10 grandchildren, and one great grandchild. Finch's older son Ron lives in and owns his own window dressing company. Ron’s two sons are in college and his daughter is in high school. Finch's younger son, Holmes -- by his second wife, Pat -- is an Associate Professor at in , where he serves as Director of Research for the Office of Charter School Research.

In 2002, on his 80th birthday, Finch suffered a stroke. Despite this significant setback, he fought his way back and was soon sharing the helm of The Finch Bandwagon on another station, WOLS, where he was again immersing himself – and his many fans in the area – with his beloved big band music. Click the "Play" button below and enjoy a few minutes of an original AFRTS broadcast of The Finch Band Wagon.