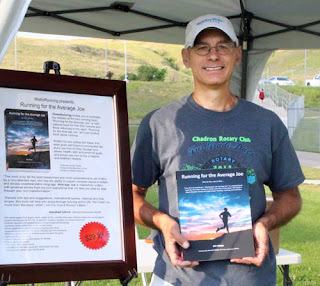 A Chadron native, who recalls he “hated running” when he was in high school in the mid-1970s, has written a book some 40 years later telling how much he loves it, or at least how it has become his passion and made him much healthier.

The runner-turned-author is Bill Watts, who lives in Littleton, Colo.  His book is titled “Running for the Average Joe.”  It is being recognized as ranking among the most comprehensive books ever written about running, covering what one noted runner says is “everything from A to Z” about what has become one of America’s more popular and healthier activities.

Watts, 59, said he got what amounted to a “wakeup call” on January 1, 2002 when he learned that his blood pressure, cholesterol and heart rate “were all through the roof” and he tipped the scales at 199.5 pounds, a lot more than he should have weighed.

He knew it was time to change his lifestyle or he was in trouble.  Although he refuses to call it a New Year’s resolution, his new resolve has remained with him.

While he said initially he couldn’t jog more than halfway around a 400-meter track without thinking he would pass out, five months later on Memorial Day he was in the throng that ran the Bolder Boulder.

Since then he’s run hundreds of 5-K and 10-K races and completed 88 marathons, which are 26 miles, 385 yards, in 31 states and also has run numerous longer races, often to benefit causes he supports.