Note:  With thanks to Chadron State College, we re-print the following story from CSC about Clyde "Andy" Anderson, a standout pitcher for the Chadron Elks in the 1950's.  We've also inserted a couple of additional photos. (Thanks to Con Marshall, Mike Smith and Bud Larsen!)

Andy Anderson remembers when he didn’t think college was for him. He was happy as long as he had a decent job and the time to hunt, fish and play baseball.

Andy grew up in Minatare and baseball was his sport. He was a tall, left-handed pitcher who played ball with Verne Lewellen and Bill Stephenson; both top-notch all-around athletes who enrolled at Chadron State and played football after they had served in the Army during World War II. 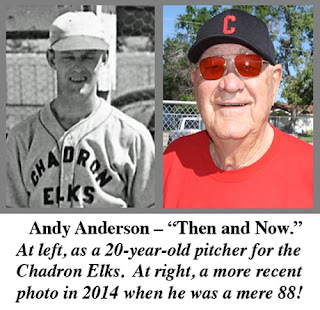 When the Elks needed a pitcher, “Lew and Steve” remembered their former teammate and encouraged him to join them in Chadron. The deal included a job at the Chadron Milling Co. which was managed by Paul Babue, who was a strong booster of CSC athletics.

After he’d worked at “The Mill” for a couple of years, Andy says Babue called him into his office. “He told me, ‘Andy I’m firing you. You can’t work here anymore. Now get yourself up to the college and earn your degree.’”

“Well, I took his advice and that was the best thing that ever happened to me.” Andy recalls. “I owe a lot to Verne Lewellen, Bill Stephenson and Paul Babue. It was their influence that brought me to Chadron and then got me to Chadron State.”

After Andy graduated from CSC, he taught and coached in area schools for five years before becoming a Bankers Life of Nebraska Insurance agent in Scottsbluff.

After school, Andy faithfully supported his alma mater. In 1989, he was among about a dozen individuals who formed the Foundation’s Living Legacy Club. Its members designate that their estate will include a gift to the college.

“I’m so happy that Chadron State is continuing to do well and attracts so many outstanding students,” Andy notes. “It’s rewarding to keep track of what’s going on at the college and I urge others to become involved. I know you’ll enjoy it.”

To learn more about joining the Living Legacy Club, or ways you can give to CSC, contact Ben Watson at bwatson@csc.edu or 308-432-7007.