Memories of the Chadron Congregational Academy...

One of the joys of reunions is seeing old friends and getting better acquainted with other persons from your past.  Such was the case this month when we attended a reunion of Chadron State College alumni in the Phoenix area.

And sometimes it's not just the people who delight you -- it's what they bring to the gathering. 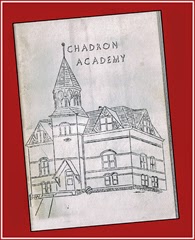 Linda Neeland Cullers brought along an undated booklet of biographical sketches of students who had attended the old Chadron Congregational Academy, which preceded Chadron State College by several years.  It also contained a short history of that institution, authored by Gertrude Lutz.  What a treasure!

The history helps fill in huge voids for many of us who have heard of the old Chadron Academy (not to be confused with the later Assumption Academy parochial school) but knew little, if any, of its history.  This little 60-page booklet does the job nicely -- especially  the autobiographical notes from some 110 students who attended the school.

Linda agreed to loan us this splendid booklet, and we're providing Gertrude Lutz's history in this posting.  In the near future, we'll add some of the fascinating biographies that are included in the publication.  Enjoy!

A SHORT HISTORY OF THE CONGREGATIONAL ACADEMY
()
By Gertrude Lutz

If you stroll up the College Hill and go just beyond the gate, you will see the remains of a narrow cement walk zigzagging ujp the hillside.

In the year of 1888 the minister of the Chadron Congregational Church, Rev. A. J. Powell, met with a group of ministers and missionaries of this region to talk about a for Chadron.

There was a need at that time for High School graduates to qualify for teaching positions with county certificates in .

The at that time offered only an eleventh grade level and some felt that was not enough for teachers.

Besides many older persons who would like to teach had not the opportunity to finish a High School course.

So the Northwestern Association of Congregational Churches was formed and after much thinking and debate, a decision was made to build an academy with four years of High School work at .

The Articles of Incorporation were filed on November 16, 1889.

The location for the school took some thinking and decisions but it seemed that the hilly area South of the city of was the place.

So eighty acres of this hilly land was bought from Judson K. Deming for $3200.  It was mostly pine tree country and hills but a slope near the Northern part down towards the town was the spot chosen for the building.

This land was bought on November 21, 1888 and the building was begun the following summer and was not finished until the year 1890.

The building was made of brick and native stone and was to be three stories high, but only two stories were finished at first and then the furnishings were needed.  A lien had to be put on the building for needed funds.