Floanne "Bunny" Apa Nitsch was kind enough to share this First Grade photograph taken at East Ward school in about 1951. It's the latest of several class photographs we've begun collecting from Chadron Public Schools over the years.
Many of these youngsters went on to graduate with the CHS Class of 1963. Teacher Myrtle Forbes is standing at right. You'll likely need to click on the photo to see a larger image, or you can visit our Chadron Public Schools Gallery and select an even larger image from the menu.

We need help identifying many of these folks. So send us an e-mail with your thoughts, or you can just leave them in the Comments link below this posting. Those who can be identified include:

We’ve been fascinated with family history for a long time.

Thanks largely to a burgeoning sector of gray-haired baby boomers, genealogy remains one of the fastest growing hobbies in the country. Computers have become an invaluable resource, and reams of new data are added every week.

Much to our chagrin, we’ve come to learn that not everyone shares our passionate yearning to know more about our ancestors. Young people, particularly, seem almost immune to contracting this affliction, but many will eventually succumb.

Some time back, we happened across this poem, Visitor, penned by Chadron native Jill (Colwell) Burkey. Jill's piece Pregunta won first place in the 2009 Denver Woman’s Press Club’s Unknown Writer’s Poetry Contest. But it was her honorable mention entry, Visitor, that really caught our attention. We were moved when we heard her read it, and she has graciously allowed us to share her poem here. You need not be a genealogist to appreciate the truism that it conveys.

When you are a child, you assume
you will go on never knowing anyone
who rests beneath a sad stone.
Death is before your time –
just a name and date your parents visit.

Then one day in June, you’re thirty-four,
buy a dozen light-pink roses
and deliver the better part of your bouquet
to the cluster of graves that is now your family –
the grandpa who called you "frizzletop,"
the great aunt who always served dilled beans.

So much history in too little ground,
but there they are, mingling
at a permanent cocktail party, sitting
two by two on a long car trip,
a tall dandelion the groundskeepers missed
now an arm waving to you out the window.

The four leftover roses you bring home
wilt by your windowsill, and you begin
to feel the wheel on the watch turn
towards your generation, the engraver’s
chisel itching to scratch your name.
--Jill Burkey


Jill grew up on Pepper Creek Ranch, twenty-two miles south and eight miles east of Chadron. Her great-grandparents, Earle and Jeannette Colwell, founded the ranch in 1915. 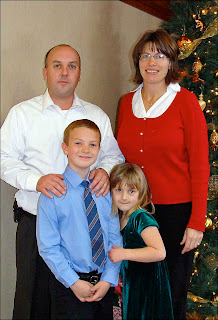 A 1990 graduate of Chadron High School, Jill went on to earn a BA in English and Business at Nebraska Wesleyan University. She married Todd Burkey, and they moved to Grand Junction, Colorado, where she is now a freelance writer and stay-at-home mother of two elementary-aged children, Parker, 8, and Brooke, 6.

That’s Jill and family in the photograph at right. Just click on the image to see a larger version.

Many old-timers will remember Mr. and Mrs. Bill Colwell, who ran the Pepper Creek Ranch for many years. The Colwells were also involved in a wide range civic affairs in the region. Their son John Colwell – Jill’s father – was a 1961 graduate of Chadron High School, and that class is planning a reunion next summer (July 2010) in Chadron. John and Peggy were quite well known in and around Chadron for many years. They now divide their time between Grand Junction, Colorado and Arizona.

Many thanks to Jill Burkey for sharing this great poem – and photographs – with us.
Links to this post

A blast from the past: Colacino's

Ask almost anyone who grew up in northwest Nebraska in the mid-20th century about Colacino’s, and you’ll see a smile emerge – along with lots of memories! 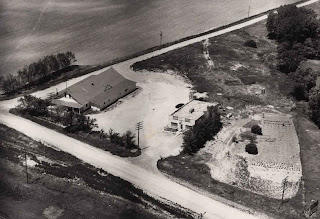 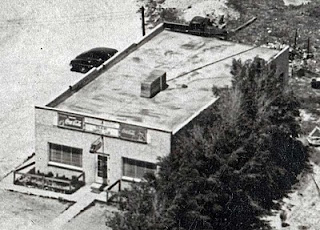 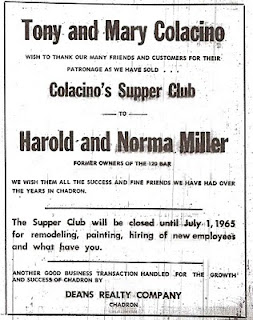 
In later years, the pavilion was painted pink and was popularly-known as the Pink Panther. It continued to be a site for weekend dances. By the mid-1970s, Gil and Roger Nitsch owned the property, and they converted the venerable old hall into a pig barn.

No more dancing, no more squealings;
we’re left with just nostalgic feelings.
Links to this post