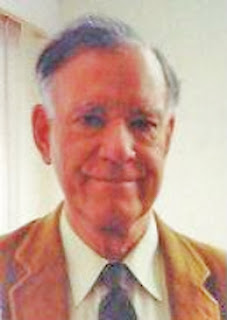 PHOENIX, Ariz. | Larman C. Wilson died on Dec. 28, 2019 at age 89.  He was born and raised in Nebraska and graduated from NE State Teachers College in Chadron. He was in the Military Sea Transportation Service during the Korean War.
In 1959, he married Olga Jurevitch who was born in Kosovo, Belarus. They lived in Washington, D.C. while he was completing his Ph.D. in Government and Politics at the University of Maryland in College Park. Larman was a professor and taught at the University of Maryland (both on campus and in the Atlantic Division of its Overseas Program), the U.S. Naval Academy in Annapolis, MD and American University in Washington, D.C. He retired from the last in 1996 as a Professor of International Relations in the School of International Service where he was also an associate dean.
He was the author of 60-some professional articles and chapters, and co-author of five books. He also had been awarded fellowships by The Hague Academy of International Law in Holland to join a seminar and by the OAS to attend a course of the Inter-American Juridical Committee in Rio de Janeiro, Brazil.
Pause
Current Time

LIVE
Loaded: 0%
Progress: 0%
0:00
Fullscreen
00:00
Mute
In 2000, he and his wife moved to Phoenix, AZ.
His survivors include his wife of 60 years; two daughters, Natalia Wilson of Phoenix, AZ and Katherine Wilson of West Hartford, CT; four grandchildren; and two brothers, Gilbert Wilson of Sundance, WY and Douglas Wilson of Lincoln, NE.
Memorial donations may be made in his name to The Chadron State Foundation, https://www.csc.edu/foundation/giving.csc

~~~~~~~~~~~
Note:  To read more about Larman Wilson and the challenging years when he and his brothers were growing up in a single-parent home in Chadron, we invite you to read:
Beyond Wilson Acres