That old football spirit comes back to life! 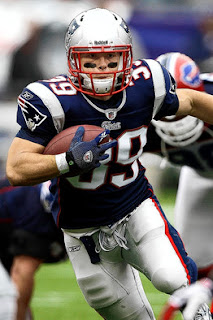 Former Chadron State Eagle Danny Woodhead’s passion for football and – to steal a line from the U.S. Army – “trying to be all you can be,” has been an inspiration for many.  Your’s truly included.

As a one-time high school athlete now collecting Social Security and nursing my poor, worn-out flat feet, I must confess that the pursuit of other interests – including working at a career in broadcasting – pulled me away from my early love of sports for most of my adult life.

Even as recently as a 50th high school class reunion last year, I wrote this about what I learned at Chadron High School:  “…that there’s more to life than sports…that teamwork is just as important in the rest of life as it is on the field or on the court…that growing up in a small town was a pretty good thing….”

Not that my bride and I haven’t followed sports.  You can’t grow up in Nebraska without being at least a closet fan of the Nebraska Cornhuskers.   In Oklahoma, we learned to love the OSU Cowboys (usually in the shadow of the OU Sooners!)  We particularly enjoyed basketball games in Gallagher Hall, and many years later would follow our Black Hills State University “Yellowjackets” exploits at the Donald Young Center in Spearfish.

But the truth is, until our grand nephew, Chance Galey, started playing for the Chadron State Eagles back in 2005, I was not a big football fan.  But as we began watching the Eagles play more often, we started getting caught up in the game again.

And then, there was Danny Woodhead.

Woodhead and Chance played together on some terrific Eagle teams.  And while Chance collected several honors for his performance as starting center for three years, it was Danny Woodhead who made an indelible impact upon the record books at Chadron – and in the NCAA.  He set a rushing record (at that time) within either Division I or II of the NCAA and was the recipient of two Harlon Hill trophies, the Division II equivalent of the Heisman trophy.  And there's a litany of records he established in his college career while also winning academic awards on his way to earning a degree in math education.

Like so many other CSC alums, we followed Danny’s career as he first went to the New York Jets. Despite an injury and some bouncing around between the Jets and their practice squad, Danny Woodhead persevered.  Finally, he was released by the Jets, and some of us wondered if perhaps Danny may have finally come to the end of his journey in professional football.

Obviously, we didn’t fully appreciate the commitment that this young man had and continues to exhibit as one of the most unlikely success stories in the NFL. 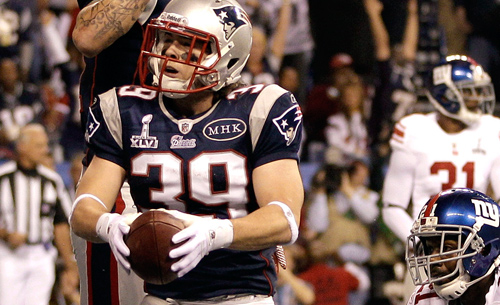 Danny’s skills appeared to fit nicely with Bill Belichick’s strategy at New England, and none of has looked back since!  Despite the Patriot’s loss in the Super Bowl, Danny Woodhead again displayed the kind of commitment and dedication he has to the game, and to his teammates.  And that fact certainly has not gone unnoticed by Patriots fans.

Even back at Chadron State, we watched Danny and the Eagles play with “heart,” and we have little doubt that he’ll continue to inspire us all.

While he’s not a “star” in the same sense as Tom Brady, Danny’s hard work is paying off.  His pay was bumped up to about $700,000 (still a far cry from Brady’s $13.2 million, and even wide receiver Wes Welker’s $4.1 million) and now endorsement opportunities are blossoming.   Last summer, Danny was tapped for a two-year deal to be the athlete promoting the Sketchers fitness footwear collection.

That sort of thing comes with the “turf,” but only for those who’ve achieved remarkable success.  We thought it was telling that Sketcher’s president Michael Greenberg  astutely observed that “Danny athleticism and dedication are truly inspiring.”

I’ll bet those could have been the very words that veteran Chadron writer Con Marshall might have used in assessing a younger Danny Woodhead shortly after he took to the field for the Chadron State Eagles in 2004.

I’m a believer that such “heart” comes largely from nurturing  parents and family members, as well as early friends and mentors.  Danny’s parents, Mark and Annette Woodhead of North Platte, should take a bow.

And now, for the first time in decades – maybe ever – I can hardly wait for next football season!