70 Years Ago – Who won this sleek new Studebaker? 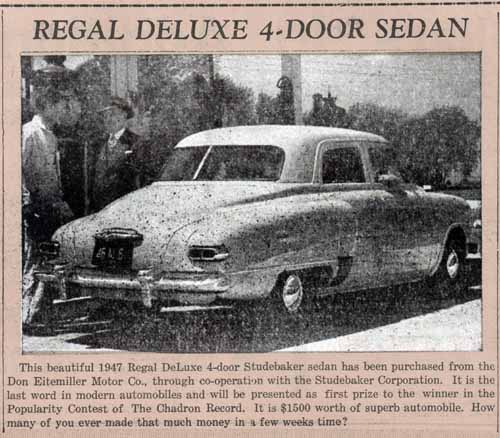 This item appeared in the Chadron Record in the summer of 1946.   Do you
know who won the car?  If so, drop us an e-Mail.  We would like to know.

UPDATE: July 5, 2018
No need to check back copies of the Chadron Record – we have an answer! Joy Champion Vera writes from California that her mother, Beverly Cronk Champion, has identified her uncle – Charlie Harshfield – as the winner of that sleek 1947 Regal DeLuxe 4-door Studebaker.  If we understand correctly, Beverly's aunt Bonnie was married to Harshfield.  Old-timers will associate the Harshfield name with the Sioux Oil Company that was located on the west edge of town.  Of course, the service station and cafe took their names from the oil refinery on site.  It was all simply called the Refinery!