This is the second of a two-part series that covers the highlights of athletics at Assumption Academy in Chadron during its 38-year history.  Written by Con Marshall, these newspaper stories were originally published in August of 2011.  Our thanks to Con for allowing us to use this story and to Jim Sandstrom for sharing photos from some of his years as a student athlete at the Academy.

Chadron Assumption had many athletic highlights
by Con Marshall

George Shinker was just 20 years old and still two years away from graduating from Chadron State College when he was named Assumption Academy’s head coach of all three sports in the fall of 1953. He had graduated from the Academy in May 1950 after being a standout on the basketball team.

Shinker’s first football team at Assumption was a six-man crew that had just two seniors on the roster and went 0-7. However, during the next five seasons, the Panthers were 34-7-1 on the gridiron. The 1955, ’57 and ’58 teams lost just one game apiece. The 1955 team was also tied.

The Panthers also were strong in basketball under Shinker. They won four consecutive district tournament championships, but always lost out in regional tournament contests.  This was an era when it wasn’t easy to make it to Lincoln because only four teams were in the state tournament in each class.  The 1957 team was beaten by Uehling, which is located in northeast Nebraska about 30 miles from the Iowa state line. The playoff game was in Plainview, nearly as far from Chadron as Lincoln.

The 1958 team went 19-4 and helped Chadron earn the title of Basketball Capital of Nebraska.  Chadron Prep was 19-3 and Chadron High was 17-3 that season.  (Editors Note:  To see a larger version of the photo above — and others — visit our Chadron Schools Gallery.

The Panthers got a boost during the 1950s when Chuck and Larry Murray came from their parents’ ranch on the Wind River Reservation in central Wyoming and enrolled at Assumption. They were tough and talented enough to have played for any high school football team in the country. They also were basketball standouts at Assumption.

During a recent telephone conversation, Chuck said his family lived 24 miles from town, all of it dirt road. Therefore, his parents decided it would be more economical and safer if they went elsewhere to high school. They sought information about Jesuit institutions and chose Assumption over Alliance St. Agnes.  Their sister, Ivora, also enrolled at Assumption during this era.

Chuck said one of his many memories of his days at Assumption was going to basketball practice early in the morning so the Panthers could use the Community Building (now Middle School Gym), where their games were played. Chadron High, Chadron State and Chadron Prep practiced there in the afternoon and evenings. The Assumption Arena opened the year after Chuck graduated from the Academy in 1956.

Following their days at Assumption, the Murray brothers stuck around and also played football and graduated from CSC.  I may be wrong, but I think they are the only Assumption grads to earn letters in football at CSC aside from Dale Tangeman in 1939 and ’40.  Both of the Murrays also went on to earn master’s degrees in education from the University of Wyoming.

Shinker left Assumption for a teaching and coaching job at Lusk in the spring of 1959. He earned a master’s degree from CSC in 1962 and had an outstanding career as a school administrator. He was the principal three years at Hemingford, the principal three years and superintendent five years at Ainsworth, the superintendent at Creighton seven years and the superintendent of the West Holt Schools at Atkinson 16 years. He was on the Nebraska School Activities Association’s board of control before retiring in 1995. He died at age 76 in 2009 with many friends and admirers.

The next two years after Shinker left, the Panthers were coached by Chadron State PE majors.  Jim Davison coached the 1959 football team that went 7-0-1 with the only blemish a 13-13 tie with St. Agnes and Rod Borders was the coach in the fall of 1960 when Mullen dealt the Panthers their only loss during a 7-1 season.
Complete statistics from that era don’t seem to be available, but a story in the Chadron Record said Bob Marchant, who was just a sophomore, had touchdown runs of 85 and 90 yards during a 31-7 threshing of Sidney St. Pat’s in 1959.
Read more »

Small neighborhood grocery stores were popular places in the early-to-mid 20th century.  And there were several of them that we remember around Chadron. Similar stores were in Crawford, Whitney, and other county locations, we're sure. 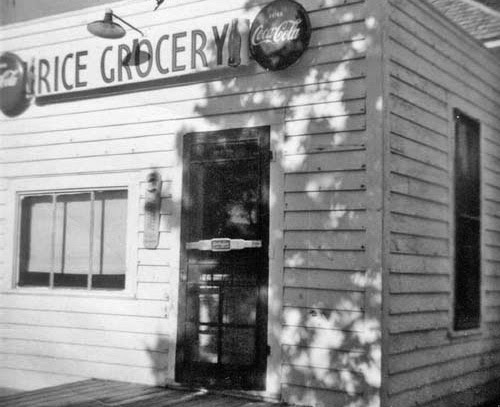 The store shown here was situated on the northeast corner of 5th and Ann Street, just a block north of where the Chadron Middle School sits today.  Of course, in addition to meats, breads, canned goods, and dairy products, there was an ample selection of pop and candy!  Back in the day when all grades — Kindergarten through 12th — were in the same building at 6th and Ann, this was a really popular place with the kids on the east side of town.  We first remembered it as Moore's Grocery in the 1940s and early '50s.  Insurance agent Dale More and his wife Beulah owned the store back in those days.  For a short time it was owned by a fellow named Fletcher, and then it was bought and operated by Willie and Millie Rice as Rice Grocery until it closed, in the late 1950s.

As one neighbor said, "We all liked these small stores.  They had credit and they were conveniently located.  Why would you drive to the big downtown grocery store when you had to pay 12 cents a gallon for gasoline?"

We remember similar grocery stores, such as Kenwood Grocery, White Grocery on West Highway 20, and Miller Grocery at 6th and Main.  There were also small grocery stores in the villages of Whitney, Marsland, Belmont and others.

Crawford also had a variety of smaller grocery stores -- several of them operating at the same time.  The most venerable of the group was Absalon's, which operated at 2nd and Main Street for more than 40 years.  It is now D & S grocery.  But even before it was Absalon's, it was owned by Ploosters for several years.  Old-timers may remember when it was Knapp's.  Then there was Quick-Serve, Star Grocery, and Lewis'.  And the Galey Little Store operated for several years along west Highway 20 before closing in the early 1990's.  It was earlier owned  by Jack Ellis -- and before that by a fellow named McHugh.


Importantly, most of these locally-owned stores extended credit to their better customers.  They were, after all, neighbors!

Alas, as a kid, I don't remember having my own personal candy account at our neighborhood store.  Nonetheless, resourceful youngsters could usually scavenger and find empty pop bottles or milk bottles and turn them in for a refund, which could be used to support our candy habits.  Pop bottles brought 2 cents each, while milk bottles were worth a whopping 5 cents.

Ah, those were the days!

We're happy to present a two-part series that hits the highlights of athletics at Assumption Academy in Chadron during its 38-year history.  Written by Con Marshall, these newspaper stories were originally published in August of 2011.  Thank you, Con!


Chadron Assumption had many athletic highlights
by Con Marshall

While Mike Smith and his wife Jo were avoiding the heat in Arizona and resided in Chadron during much of July 2011 (When our high temperature reached at least 90 on 20 dates and topped 100 degrees seven times.), I wrote a sports column about Chadron Prep and Assumption Academy closing 50 and 40 years ago, respectively.

The column recounted numerous athletic highlights that the two high schools had during their existence.  Bolstered by its three Class C state basketball championships of the 1950s and the limelight that went with the titles, Prep received quite a bit of the spotlight.

Mike, a 1953 Chadron High graduate whose career included being sports editor of the Minneapolis Star-Tribune, didn’t quibble with that. But he gently suggested that I could have named some of the Panthers who made Assumption a small-school powerhouse at times.

Since the column already contained more than 1,500 words (so does this one), I had avoided listing names by noting there were too many standouts to mention.  There were definitely a lot of exceptional athletes who wore the Blue and Gold through the years.

But Mike was convincing and helped by asking Dan Konrath, a loyal Assumption alum who has a wealth of information about the school, to loan me a copy of the 2010 Alumni Directory that Dan put together. It is a masterpiece that contains individual photos of all the 597 graduates during Assumption’s 48 years of operation.

Mike’s prodding and Dan’s book inspired some additional digging. It was interesting.  I found so much material that it will stretch over two issues of the newspaper.  This episode will discuss some interesting events from “way back when.” Next week, we’ll talk mostly about the final 20 years that the school was open.

Mention was made in the earlier column about Assumption’s undefeated and unscored upon 11-man football team in 1932. Despite considerable research nothing more has been learned about that team.  Since there are only 15 players in the team photo, they had to be iron men and it had to be a fantastic season. Few teams anywhere have duplicated it.

Even before that, Assumption had at least one big moment in sports. In 1929, when Assumption was in just its fifth year, the basketball team went to the state tournament.  I learned about that team in May 1990, when Marion Talcott, the team’s coach, visited his hometown. He was 84, but still full of energy and information.