It's always fun to stumble upon unexpected treasures while scavengering through data in search of genealogical gems.

Such was the case this week, when I was searching on-line at USGenWeb and decided to take a peek at an unidentified Dawes County Nebraska file. For those of you unfamiliar with GenWeb, it consists of volunteers working together to provide Internet web sites for genealogical research in every county and every state of the United States. The Project is non-commercial and fully committed to free access for everyone. If you've never visited their web site, check it out at http://www.usgenweb.org/

My latest serendipitous discovery was a collection of letters pertaining to one of the pioneer families of Dawes County: the Maika clan. Although I'm not certain of the relationships, I vividly remember a pair of Maika children who resided on east 2nd street in Chadron during the 1950s. I also recall my mom and dad occasionally referring to the Maika name, and I somehow learned that an earlier Maika family member had run a drugstore. Alas, where in Chadron that drugstore might have been situated, I don't know; perhaps one of our readers knows and can share that information with us at galey@rushmore.com.

The Chadron Centennial History 1885-1985, published by the Chadron Narrative History Project Committee in 1985, offers little information about the Maika family. However, it does refer to an early day (ca. 1906) Chadron druggist named H.F. Maika, whose establishment apparently carried some of the drugs that were the subject of questionable advertising. Cited was the example: "Easy Labor and Painless Childbirth guaranteed by the use of OSAGE PILLS. Purely vegetable and Perfectly Harmless -- Being compounded from numerous herbs and roots which have been in use among the Osage Indians for years."

If you're researching the Maika family or have an interest in early Dawes County Nebraska, you're sure to enjoy poring through the letters and information contained in this bit of research. 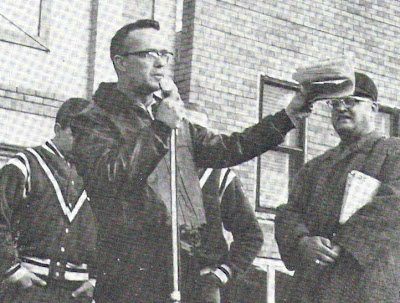 We received an e-mail the other day that led us to a KCSR Radio web site containing a story written a good number of years ago. I think it was discovered by Chuck Cogdill (CHS-1957) and passed along to a few of his correspondents.
-
The subject was Chadron High School basketball. Not surprisingly, the story was written by the indefatigable Con Marshall, something of an icon for those of us with any interest in knowing who the best-ever free-throw shooter at CHS was......or who had the best batting average when CSC still had a baseball team.......or who the most prolific pass-receiver was for the Eagles in the 1940s. Con knows all that stuff, and if he can't remember, give him a a couple of minutes and he'll find it......somewhere!
-
This article by Con was apparently written in 1985. Of course, web links come and go, so I've posted the text separately here with thanks to Chuck, brother John, KCSR, and -- of course -- Con.
-
In the photograph above is former CHS basketball coach Verne Lewellen, atop a flatbed trailer in downtown Chadron in March of 1961. That's the year the Cardinals won their first state basketball tournament. The team and coaches had just returned home from Lincoln and were greeted by a huge crowd. Long-time sports booster Paul Babue is at right.
-
As a student and player, I and most of my teammates thought Verne Lewellen walked on water. I still do. Okay, okay.....that's just a figure of speech. Nonetheless, he was an excellent coach and wonderful role model.
-
Nearly 50 years later, as I watch coaches from the NBA down to the local junior high schools, I am often appalled at the way in which they conduct themselves.
-
Coach "Lew" set an example for all of us. His quiet, low-key mentoring stayed with many of us long after we left the basketball court. I admired the way he coached, and I still admire the kind of person he is.
-
I finally cornered Verne Lewellen at a CSC football game this year, and I told him exactly how much I appreciated what he taught so many of us, by technique.....and by example.
-
Thanks, Coach.