65 Years ago at Chadron Prep… 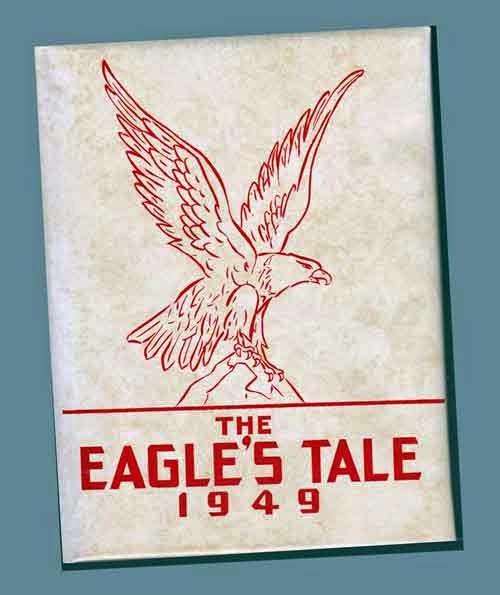 The decade of the 1940's was about to end, leaving behind the devastation of World War II and ushering in a new era of prosperity.  The Great Depression was becoming but a memory.

In 1949, unemployment was only about 3.8 percent, and you could buy a First Class postage stamp for a mere three cents.  William Faulkner was the recipient of the Nobel Prize for Literature, but the really big news of the year was the weather.  The New Year blew in with snow, ice, and bitter cold that gripped the northern plains for the first few months of l949.  For Chadron, Nebraska, it was one of the harshest blizzards on record.

For high school seniors at Chadron Prep, it was a time of reflection — and anticipation — as they grabbed their diplomas and raced toward the 1950's.

The 1949 "Eagle's Tale" summarized the accomplishments of the 28 seniors who graduated that year, and dedicated the yearbook to coach Archie Conn, "who has endeared himself to all of us with his admirable coaching ability, rich personality, and sympathetic understanding of our problems."

Under coach Conn, the Junior Eagles had completed their most successful basketball season in Prep history and "humbled Chadron High 50-9."  Of course, Prep basketball would move on to even greater glory with state championships in the 1950's.

In April, the Chadron Prep Junior-Senior Banquet took place at Colacino's Supper Club east of Chadron.  Then the Prom was held at the Women's Recreational Hall.  Music was provided by Bob Folsom's orchestra.

Dr. Wiley Brooks, for whom Brooks Hall was named, was then president of Nebraska State Teacher's College at Chadron.   Commencement took place in the college auditorium on May 26, 1949, and Rev. Carl Spieker of Scottsbluff gave the address, "Youths Adventure."

As was common in yearbooks of the era, the Class of '49 authored a "Class Will," whereby members of the graduating class passed along a variety of legacies to underclassmen.   For example, George Babcock bequeathed "my aptness in making life miserable for the faculty and practice teachers to Danny Kuska."  Leana Finney gave her "quiet charming laugh to Margies Swett," while Bernard Konrath willed his position as "junior executive at the Safeway Grocery to upstart Ted Turpin."

Within a dozen or so years, Chadron Prep would cease to exist, but the Prep spirit would survive — and even thrive for more than half a century — and graduates continue to gather annually and celebrate their common bond and experiences as "Junior Eagles."

Ray David has died.  The 88-year-old combat veteran of World War II passed away last Tuesday (9/30/14) in Minot, North Dakota, where he had been living in recent months as his health declined.

Many Chadron area residents will remember the tall and handsome Ray David and his beautiful wife, Shirley, from their years when Ray came to town to take over as manager of the old Pace Theatre (now The Eagle) in the mid-1950's.

Although his years in Chadron were few, Ray David went on to a successful career in broadcasting and politics.  But what’s really remarkable is how this humble but creative kid, born into an impoverished Kansas farm family  and raised in the Oklahoma panhandle and western Colorado, would pursue life with a passion and fight his way to success.

Dropping out of school after the 8th grade, Ray worked at a variety of jobs in Oklahoma and Colorado, before taking off to California and a short stint as a machinist’s helper in the Mare Island Shipyard at age 16.   By then, World War II was in full swing, and Mare Island was abuzz with ship construction and repairs.  Alas, California law required a waiver from Ray’s parents in order for him to maintain his job – but since his parents lived in Colorado, they could not sign the waiver.

But they could and did later sign a letter approving his underage entry into the Army Air Corps, where he could serve his country and be close to one of his loves – aviation.  But the Army, being the Army, had other ideas, and he ended up in the infantry and was part of the D-Day invasion of coastal France in June 1944.
Most remarkable about his story is the fact that Ray David – wounded both in France on D-Day and six months later at the Battle of the Bulge – could later be so candid about the anguish of losing friends and his own struggles while battling the demons of war,

Many years later, Ray wrote about the war-time experience of meeting up with his old buddy Jack Harp while on sentry duty in the heavily wooded hills on the eastern edge of the Ardennes Forest.

“The enemy was on top of us before we knew what was going on.  Jack alerted his Company Headquarters on the field phone.  When all the heavy fire power started coming in, Jack was hit in the shoulder and chest.  In agony and pain he jumped up to get back to the medic at his CQ.  He was hit by shrapnel from a phosphate shell; it hit him in the right side of his face and neck,  The burn and wound had to have been excruciating.  Poor Jack tore my field jacket from my shoulder, as I held him trying to apply sulfur power in his wounds and give him a shot of morphine from his medical kit.  All the while he screamed for help from his mother, God, and the medics.  Within a few minutes, he was gone.  I was stunned, absolutely stunned.  I had witnessed other similar situations, but Jack was like a brother.

The next few days were a blank.  I don’t believe anyone can fully grasp the horror and the awful feeling, without actually being in the midst of fear, confusion and the loss of mental focus as the screams, moans and begging for help fill the air leaving an indelible scar on your memory.”

Although he survived the war, Ray David's personal life was turned upside down. His wartime  experiences and traumas resulted in electric shock and insulin treatments and “Ice Baths.” Ray’s candor and honesty as he wrote about these incidents in later years is truly moving.

But he pieced his life together into a successful career.  His years with the Black Hills Amusement Company led to a variety of jobs in Rapid City, Newcastle, Hot Springs, and Chadron, where he managed the Pace Theatre and the Starlite Drive-in.  During these years, he married Shirley Wilcox of Hot Springs.
In Chadron during the mid-to-late 1950's, Ray became extremely active in promoting the community, helping re-arrange the 9-hole golf course at the Country Club, raising money for the college, and volunteering to do promotional work for the International Parks Highway 385-85.   A few folks may remember Ray sitting atop a 50-foot pole for 11 days to raise money for a new wing at the old Chadron Memorial Hospital.

But his many successes led Ray David away from Chadron to Williston, North Dakota, where he went to work for the Chamber of Commerce for a while.  Then he started a 16-year-career in broadcasting with KEYZ in Williston, which led to ownership of stations in Dickinson as well.  He would later serve on the Board of Directors of the National Association of Broadcasters.  His broadcast ownership allowed him to expand the scope and depth of community promotion.

Despite his lack of a formal education, Ray also served as an adjunct faculty member at the University of North Dakota-Willison, where he taught Public Speaking and Public Relations.  He served two productive terms as a State Senator in the North Dakota Legislature.

We had the pleasure of getting reacquainted with Ray David in recent years, exchanging e-mails and sharing stories about broadcasting and Chadron in sometimes rather lengthy telephone calls.  His was a truly remarkable life.
Read more about Ray and his family in this Ray David obituary.