The Chadron Record newspaper has been around for a long time.  Originally known as the Dawes County Journal (that does have a familiar ring to it!) the paper was founded by E. E. (Ed) Egan shortly after he arrived in Chadron back in 1884.

Of course, lots of other folks ran the newspaper over the years, including Maurice Van Newkirk, Don Huls, and many others.  But this time we offer you a bit about George C. Snow, the fellow who bought the old Journal newspaper from Ed Egan, and who probably had as distinguished career as any of the green eyeshade folks.

A native of Illinois, Snow served as publisher and editor of the paper for many years.  He is mentioned several times in the Chadron Centennial History published in 1985. We found this photo and the following biographical sketch in the 1921 publication History of Western Nebraska and Its People.

Edited by Grant Shumway of Scottsbluff, it includes biographies, photos, and additional information about people and places in 11 panhandle counties.  It reads...

GEORGE C. SNOW, editor and proprietor of the Chadron Journal, and a member of the Nebraska State Legislature, worthily occupies a position of great prominence in the state. He has been the recipient of many honors, both political and personal, in his long career, and his fellow citizens have frequently testified to their sincere esteem. Many have known him longest and best in the field of journalism, for Mr. Snow is the oldest editor, in point of service, in this part of the country.

George C. Snow was born in De Kalb county, Illinois, March 5, 1874. His parents are Rev. Beecher O. and Stella (Lyon) Snow, natives of New York, born in 1853 and 1854 respectively. They now reside at Milwaukee, Wisconsin, the father being a retired minister of the Congregational church, for twenty years having served as Home Missionary Pastor for Nebraska. Of his four children, George C. is the only one living at Chadron. At Franklin Academy and Doane College in Nebraska, Mr. Snow pursued his studies until early manhood, then accepted the superintendency of a Congregational academy at Snohomish, Washington; going from there to Eureka, Kansas, and then came to Chadron, Nebraska.

A birds-eye view of Crawford 75 years ago 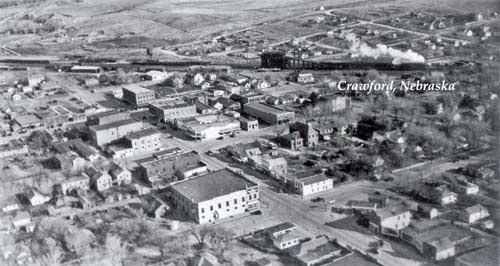 We like this aerial photo of Crawford, Nebraska.  It was taken by long-time Dawes County pilot Frank Snook back in 1939.  They may not have had Wyoming coal trains every half-hour or so, but the railroad was even then an important part of the community -- as depicted here.  Thanks to Miz Mizner for sharing this photo.  Read a bit more about the early days of Crawford. 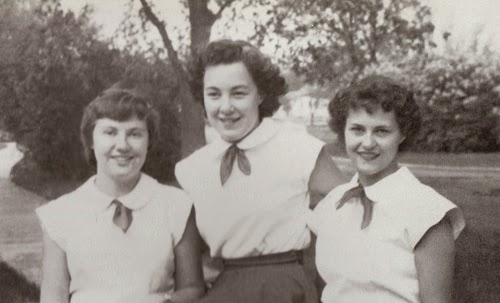 These young ladies were cheerleaders for Chadron Prep teams back in 1952.  Left-to-right are Dorcas Tlustos, Joy Dean Fox, and Helen Laue.  Chadron Prep had lots to cheer about back in those days.  While the high school has been closed since 1961, Prep was a basketball powerhouse back in the 1950's under Coach Archie Conn -- winning three state championships.  When Prep alumni gather this month for their annual reunion, few of them will be able to appreciate the history of the school any more than Jim Butler, the 95-year-old "Junior Eagle" who graduated in 1936.

(Editor's Note:  Russ Garner, a long-time resident of Dawes County, passed away on June 22, 2014.  Garner was well-known throughout the region, remembered best for his work as a country and western singer.  Our friend Con Marshall was kind enough to pass along a story he did about Russ Garner back in 2009, which we share with you below.)

Russ Garner says he was just three years old when he knew what he wanted to do in life. He wanted to be a country and western singer. The inspiration came after he’d listened to records played on his grandparents’ Victrola and to Grand Old Opry late at night on their radio.

More than 70 years later, Garner is still living that dream, much to the enjoyment of scores of admirers throughout the region. For generations, anyone who liked country and western music has wanted to hear Garner’s rich bass voice and his expert guitar strumming.

“I’ve always known what I’ve wanted to do and have enjoyed every minute of it,” said Garner during an interview in February. “As long as I can do it and do it right, I plan to keep doing it. I don’t have any plans to retire.”

Long-time fans, some of whom have listened to him for more than 50 years, say there’s been no decline in Garner’s performances, even though he was forced to  take a couple of breaks from his career.

“He has a smooth, rich sound. His voice is as good as ever,” said Cleone Hoyda of Crawford, who has frequently played the keyboard and provided vocal support when Garner performed. “Music just flows out of him.

“He’s a hometown boy who made good. He’s very professional. He won’t sing a song until he gets it to perfection. He’s put Crawford on the map as far as music is concerned and it’s never gone to his head. He’s just Russ,” Hoyda continued.

Garner was born on Feb. 20, 1932 in Alliance while his parents, Russ and Minnie, were living in a dugout on Trunk Butte Creek, about six miles southeast of Whitney. When he was 8, his mother gave him a setting hen. After the chicks were grown, he sold them and bought his first guitar and an instruction book for $10.