It's always sad to read about the death of a friend.
In late July, I learned about the passing of Lynn Gorr, a member of the Class of 1960 at Chadron High School. Apparently, at the time of his death, Lynn was doing something he loved -- hiking and climbing. He was 65 years old. 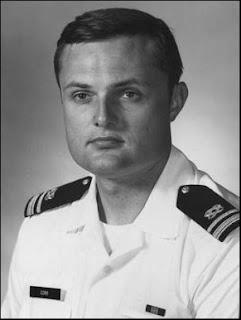 Many who grew up around Chadron during the 1940s, '50s and early '60s will remember him as a quiet and studious fellow who loved the outdoors. I remember his infectous smile, which they apparently talked him out of in the Navy photograph shown here. Lynn played football at Chadron High and was an outstanding player and student.
Lynn married his high school sweetheart, Cyndi Huls, also a member of the Class of 1960 at Chadron High School. After Lynn's six-year tour of active duty in the Navy, they moved to the Seattle area to work and raise their family. Lynn's obituary provides additional information.
It was my good fortune to unexpectedly run across Lynn in the 1980s in Seattle. He had remained in the Naval Reserve after active duty -- as had I -- and we were both attending a Naval Reserve exercise at the old Sand Point Naval Base. That was a regular drill site for Lynn, still a proud member of the SeaBees. I was on special duty as an Emergency Preparedness Officer. Our meeting really was serendipitous, and we enjoyed it immensley.
Not until last spring did our paths cross again -- this time in Nebraska for a Chadron State College meeting. Unbeknownst to each other, we were among a fair-sized group formed to help raise funds for Chadron State College. We sat together at the session, along with our former CHS coach, Vern Lewellen, who now lives in Mitchell. We had a great time. We're saddened to know Lynn won't be with us down the road on this project.
As Lynn and I visited during that gathering in Chadron, I was taken by his obvious and unabashed pride in his family. Some of that pride is captured in a wonderful on-line memorial.
Our condolences to Cyndi and family. We were all blessed to know such a fine man as Lynn Gorr. He will be missed.