The most dapper man on Main Street... 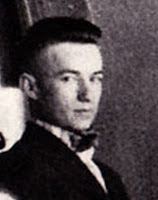 The old adage says a picture is worth a thousand words.  Well, it's not likely to take a thousand words to convey this message, but even that number would pale in the presence of a nice crisp photograph of the late Greydon Nichols -- long-time Chadron attorney.

As we rummaged through a collection of old photographs in the Chadron State College archives, we came across this photo of young Nichols.

And while he's appropriately attired in the photograph -- likely taken around 1913 or 1914 -- it doesn't begin to convey the elegance of his superb sartorial  persona in the 1940's and '50s.  He was perhaps the most dapper man in town.

First, a disclaimer.  we really knew nothing then about Greydon Nichols, except that he was an attorney -- and that he was a very fashionable fellow.  He was our own Adolph Monjou.  Briskly charging down the sidewalk on his way to an upstairs office on the west side of second and Main.  Always bedecked with a hat and wearing a finely pressed suit adorned with a handkerchief in the pocket, we seem recall that he often carried a cane, sort of like a Gene Kelley prop in a Hollywood musical.

Only now, more than a half century later, have we learned a bit more about this fellow.

First, and this was a surprise for us, he was a local boy (but he seemed so.....so...cosmopolitan!).  Born in Chadron in June of 1898, the son of Morgan and Nellie Nichols, the family lived in "Highland" precinct and later in Ward One.  His great grandfather apparently was a prominent attorney in New York City.  His grandfather came to Nebraska and homesteaded near Albion in Boone County,  and later in Dawes County.  How it was that Greydon's father was born in Wisconsin we don't know, but he found his way to Chadron in the late 1800's and became a prominent grocer and served on the city council.  He also joined the Elks Club.

Young Greydon graduated from high school in Chadron and then attended two years at the Nebraska State Normal School on the south edge of Chadron.  He took a teaching job for one year before heading west to California, where he studied literature and law at Stanford.  Returning to Nebraska, he married Adele Lefebere in Omaha in 1922, and then went to Lincoln and pursued a Bachelor of Laws degree, which he was awarded in 1924.  Then it was back to Chadron to practice law.  He was appointed United States referee in bankruptcy and would also serve as city attorney in 1925.

Nichols was also active in business and social circles, and by 1932-33, he was state president of the junior chambers of commerce.

Family?  Military service?  We don't know about any of that, but we're curious and will pursue that information.  At first glance, we found nothing about Mr. Nichols in our history reference books for Dawes County and Chadron.  Perhaps his obituary in the Chadron Journal will help us learn more about this interesting fellow.