Learning the meaning of friendship…in Chadron

Friendship comes in many forms, and it’s been a topic of philosophers and poets for centuries.

Two rather modern quotes are among our favorites.

Mark Twain once opined that "Good friends, good books, and a sleepy conscience:  this is the ideal life."

But we particularly like the pronouncement made by that sage of the ring, Muhammed Ali, who said, “Friendship is the hardest thing in the world to explain. It's not something you learn in school. But if you haven't learned the meaning of friendship, you really haven't learned anything.”
In these modern migratory times, travel has become so much easier, and having life-long friends seems to have become increasingly rare.  But one friendship jumped out and caught our attention recently, when Con Marshall told us a story about two long-time Chadron residents who grew up in the 1930's, became school chums, and enjoyed a friendship that transcended several decades, doggedly surviving the unrelenting passage of time.
This is the rather remarkable story about Bob Zeman and Lynn Bilyeu, who became friends while attending East Ward Elementary School during the Great Depression.
Our first memories of Bob Zeman reach back to the late 1940’s, a few years after the Zeman family moved in to the house at 223 Ann Street.  We neighborhood kids would often see Bob visiting his parents, Joe and Ella.
Lynn Bilyeu first came onto our radar screen a few years later while attending a meeting of the "Pine Ridge Amateur Radio Club" at Lynn's home in the Henkens Heights neighborhood in about 1959 or 1960. A retired telegrapher and dispatcher with the Chicago and Northwestern Railway, Lynn was -- and continues to be -- an avid “ham” operator.
The life-long friendship between Lynn Bilyeu and Bob Zeman is a fascinating story – and is told no better than in this article crafted by Con Marshall for the Chadron Record on March 28, 2012.  Our thanks to Con for allowing us to reprint it here.  We've also posted some additional photos in our Dawes County Journal Gallery.
Read Con Marshall's story:   An 80-year friendship 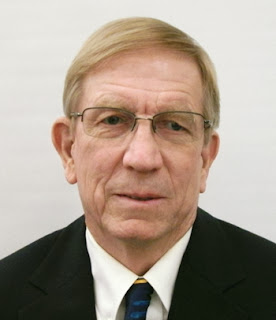 When Jerry Bauman graduated from Chadron High School in 1964, few could have predicted the enormous accomplishments he would realize in later life -- and the litany of positive contributions that he and his wife, Cheryl (Hamilton) would give back to their communities over the years.
Good friend Con Marshall has shared with us a story he wrote this fall about Jerry and Cheryl Jo, and we're pleased to publish it here.  The story was spurred by the awarding of the Chadron State College Distinguished Alumni Award to Jerry in October.  As you read Con's story, you'll understand why Jerry was selected for this singular recognition.
We best remember "Tiger" Bauman from our high school years, when he served as a student manager for the Chadron High School basketball team.  Small in stature but determined to do a good job, we should've foreseen his commitment to getting good things done!  He grew in many ways.
I recall crossing paths with Jerry only once in adult life, when he and I were passing through the Tulsa airport in the early 1980's.  I must confess that I would never have recognized Jerry, since I'm certain that he was at least a foot taller than I had remembered him from high school!   He spotted me, we had a fun -- if brief -- conversation.  I believe he and Cheryl were living in Tulsa; Karen and I were living in nearby Jenks.  However, it was shortly thereafter that Karen and I departed Oklahoma and lost any prospect of forging a new relationship with an old high school friend.
Read:  Bauman Receives CSC Alumni Honor