Youthful adventures of the 1950s

It was August of 1955. Bill Haley & the Comets were setting the music charts afire with "Rock Around the Clock," and Ray Kroc opened the first McDonald's restaurant in Des Plaines, Illinois.
~ 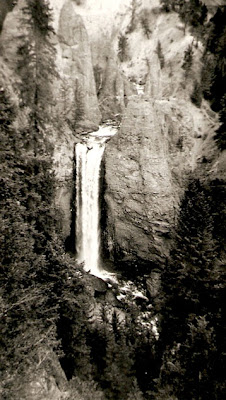 Five young Chadron boys gathered their camping gear and tossed it atop a Plymouth owned by Elwin Wohlers, and prepared for a memorable trip to Yellowstone National Park. From prairie dogs and bears to spectacular scenery -- like Tower Falls (at right) -- they were to get an up-close glimpse of nature's bounty.


Those boys were Windy Wohlers, Don Mathis, John Miller, Ron Jones and Wayne Lecher. Wohlers and Mathis had just graduated from Chadron Prep and Chadron High. Miller, Jones and Lecher would be returning to high school that fall. This was their final hurrah for the summer.


At least one of the group, John Miller, took along a camera and snapped a few photos. These are but a few of the moments captured during their trip more than a half-century ago. John's Yellowstone photos help bring back a few memories of youthful adventures!