We think Dennis Brown and his crew do an excellent job operating KCSR in Chadron. Its focus on the community and abundance of local programming help it continue a tradition that was started back in the 1950s.
~
It was fun visiting this week (3/24/09) with two fellows who helped shape KCSR back in those days..

While taking refuge in Denver from a massive snowstorm across the Black Hills and the high plains, we took a side trip to Fort Collins. That’s home now for both Jack Miller and Don Grant, broadcast veterans who at one time worked – as did I – for the “Beef Empire Stations” owned by the Huse Publishing Company, publisher of the Norfolk (Nebr) Daily News. 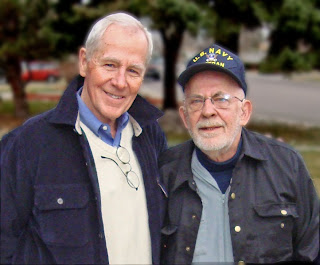 Jack Miller was named Manager of KCSR in August 1959, when the station was bought by the Norfolk group. A native of Norfolk and a Navy veteran who served aboard ship during the Korean War, Jack cut his broadcast teeth announcing and selling for WJAG beginning in 1956. Don, who hailed from LeMars, Iowa, was an Army veteran and attended the University of South Dakota after he left the service. He also worked at WJAG and did a stint at the Chadron station.

The “Beef Empire Stations” included flagship station WJAG in Norfolk, KVSH in Valentine, and KCSR in Chadron. The group later expanded to include KCOL in Fort Collins, Colorado. In 1971, Jack took the helm of KCOL, bringing along several of the KCSR staff – including Don Grant (Sales), John DeHaes (News), and Wil Huett (Programming). Many folks will remember John DeHaes as a reporter with the Chadron Record for a few years before swapping printer's ink for a microphone. He married long-time Chadron resident Lorraine Ford, who has since passed away in Fort Collins.

Jack’s leadership at KCOL continued well into the 1980s before the station was sold. He twice served on the Board of Directors for the Colorado Broadcasters Association and was named “Broadcaster of the Year” in 1981. Not surprisingly, KCOL was strong on local service during those years, and instituted local editorials – not something lots of local broadcasters were always willing to undertake. Appropriately, Jack was named to the Colorado Broadcasters “Hall of Fame” in 2007.

Seeing Don Grant was a real bonus. Since we had worked together for only about a year (and I was a part-timer still going to school), I’m surprised he remembered me at all. Jack waxed eloquent about Don’s superb sales skills – of which I have no doubt. Don remains as I remembered him from 50 years ago – a warm and personable guy. Beyond our common friends and co-workers at KCSR, it was a further surprise when he revealed that he had spent time in Vermillion, South Dakota. We also lived in Vermillion and worked on the USD campus, albeit some 30 years after Don had been there. Still, we both remembered “Monk” Johnson and Martin Busch, both well-known broadcasters across South Dakota in those years. Don and I also spent time working in the Sioux City market.

I believe Don Grant said that another veteran broadcaster, Kent Slocum, was from his hometown of LeMars. I remember Kent from his years at KOTA in Rapid City. Wonder where he is these days?

After many years at KCOL, Don later returned for an encore at WJAG in Norfolk.

During our morning discussion, which was continued over lunch at Red Lobster, we tossed out names of one-time colleagues, and occasionally we all three would remember someone – or a memorable incident that would bring a chuckle. Like the case of the “sleeping announcer.”

But that’s another story……for another time.