Long-time friend and mentor Freeman Hover passed away last Monday (2/9/09) in Tucson, Arizona. He was 79. A Memorial Mass will be held at noon on Monday, March 1, 2009, at St. Thomas the Apostle Catholic Church in Tucson, Arizona. That's the day Freeman would have turned 80 years old. 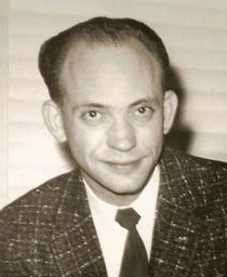 A warm and personable man, he was both a broadcaster and educator, professions that he pursued with great enthusiasm and commitment.
We first met "Free" in 1957, not long after he started his radio career at KCSR in Chadron, Nebraska, just a year or so before I began working at the same station. A native of Plymouth, Michigan, Freeman Hover earned a bachelor of arts degree at the University of Denver in 1951. By the mid-1950s, he was pursuing his first broadcast job at KCSR in Chadron.
As was true in most small market stations, Freeman Hover did it all. He was News Director at KCSR, but he had a wide range of interests in broadcasting -- one of them was "Top 40" music. He hosted "Club 949" (the station's Post Office box number) and "Top 40 Time." He became well known throughout the region, but decided to pursue opportunities elsewhere when the station was sold in 1959 to Huse Publishing out of Norfolk, Nebraska.
After a short stint in North Dakota, Hover headed toward the desert southwest and a job with the Doubleday station in Phoenix. Having earned a Master's degree from the University of Colorado, he turned his attention to education and became a classroom teacher. He eventually settled in Tucson. By all accounts, he was a top flight teacher, and he eventually won a spot in the Arizona Journalism Hall of Fame.
We have fond memories of visiting Freeman in Tucson in the late 1980s and again in the 1990s while attending public broadcasting meetings there. His love for history and the southwest was obvious, as was his pride for having been involved in the "rock and roll" era. While at KCSR, he had conducted a rare interview with the legendary Buddy Holly and a number of other popular artists of the time, including Eddie Cochran and Jimmy Bowen.
We remember Freeman as a kind and generous individual, and he certainly was an inspiration to me and many aspiring broadcasters and journalists who had the good fortune to cross paths with him.
You'll find a full obituary for Freeman Hover in the Arizona Daily Star.
Below is a short video tribute to Freeman, recognizing his time with KCSR in Chadron, Nebraska, where he left a legacy of many friends......and even more memories.
~