Trips to Colorado to visit our son in Wheat Ridge often conjure up memories of Colorado broadcasters who helped lay the groundwork for KCSR in Chadron.
The other day we wrote about a recent visit with ex-KCSR managers Jack Miller and Don Grant, who both live in Fort Collins. That delightful interlude caused me to remember Bill "Curly" Finch, a co-owner of KCSR when it went on the air in 1954. Among other places, I'm sure, Finch was once at KRAI in Craig, Colorado, before teaming up with Bob Fouse to establish the new radio station in Chadron.
While Finch was later known worldwide for playing big band music as host of Finch's Bandwagon on the Armed Forces Radio and Television Service, he also had a bit of country in him. Well, I'm not absolutely sure about that, but I do believe he understood the importance of country music to folks in western Nebraska, so he launched Curly's Corral on KCSR. It was a showcase for local talent, including long-time radio host Ellis "Peabody" Hale and another well-known musician, Russ Garner. They're among the musicians in the photo below. 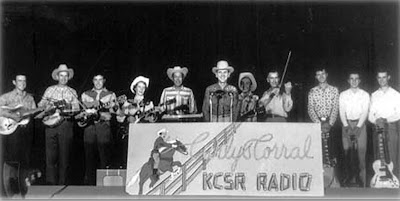 Included in this scene are (L-R): Bob Rinker, Ellis "Peabody" Hale, Russ Garner, Unknown, Neville Sits Poor, Bill "Curly" Finch, Joe Crossdog, Harry Hanson, Howard Parker, Dave Parker, and Gordon Benson.
Live broadcasts of Curly's Corral were staged on Saturday afternoons in the small KCSR studio at 212 Bordeaux in Chadron; I don't recall other venues, but I'm sure their were remote broadcasts from other locations; I was a teenager and more inclined at that time toward Pat Boone and Elvis Presley.
Finch would often engage in some spontaneous tomfoolery. Big band music really was his "schtick," and I recall one weekday afternoon when he played "One O'clock Jump" by Count Basie, then proceeded to play every other version of the tune that we had in the library. I was amazed at how long it took to accomplish the task -- and wonder how many listeners actually stayed with it!
While Finch was a shameless promoter, he had a real knack for understanding what an audience wanted. He remained in the wings while a creative Bob Fouse and witty Cliff Pike took the limelight with their popular morning show Breakfast with the Boys. I don't know whether Curly's Corral was his brainchild -- or Ellis Hale's -- but it certainly couldn't have succeeded without Finch's support and involvement. I don't recall Finch ever playing an instrument or singing, but he certainly was the perfect host for the program that carried his moniker.