A ring of Whitney memories

While working on the driveway of his home just west of Chadron recently, Richard Bates discovered a ring. Not just any ring, but an old high school class ring from a school that’s been closed for more than half a century. 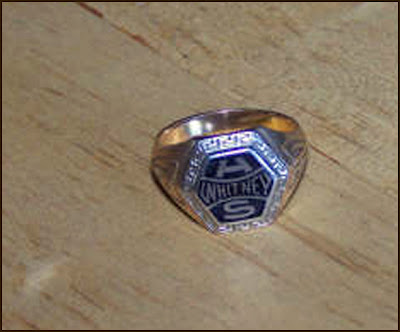 Bates, who works for the postal service, could barely read the initials on the ring, but Whitney was emblazoned across the front of it. He knew of Whitney, the small community in western Dawes County that in another era aspired to be the county seat. But how to go about finding the owner of the ring?

A stop at the jewelry store confirmed that the initials on the ring were “GC,” and its small size suggested that it had belonged to a girl. The date on the ring was 1930.

Bates inquired informally of a few friends, and then visited our Whitney Reflections website in search of a possible owner of the ring. He sent an e-mail inquiry to Whitney Reflections, and we referred back to a late 1930s Shunga newsletter that listed Whitney High School graduates up to that date. Fortunately, they were listed by year, and the evidence promptly pointed toward 1930 graduate Gwen Connell – the correct gender, and the only one with those inititals!

We called Bob and Ruth Ann Connell in Chadron and Bob Galey in Whitney, all good sources for historical information about Whitney. Bob Galey asked where the ring had been found and observed that Gwen (Connell) Walcott’s daughter, Carolyn, and Carolyn's late husband Bobby Bickford, had lived in the same area, a couple of miles west of Chadron.

Confirming with Rich Bates that his house, built in 1957, had once belonged to Bobby Bickford, we determined that the ring almost certainly had belonged to Gwen Walcott, who probably passed it along to her daughter Carolyn Walcott Bickford.

In early efforts to find a family member and return the ring, I called brother John Miller to find out what he knew about any of Gwen Connell Walcott's children. Although closer in age with Gene Walcott, John knew only the whereabouts of Gordon Walcott, one-time Air Force pilot, now living in Austin, Texas. By the time I had tracked this information down, Rich Bates had done some investigating of his own and found contact information for Carolyn Bickford’s son, Rick, who apparently still lives in the area. Carolyn, according to Ruth Ann Connell, lives in a Broken Bow nursing home. Gwen Walcott was an older sister to Bob Connell.
We’re happy that the ring is on its way back into the hands of a family member – and thankful that its finder was committed to seeing it returned to its owner. Thanks to postal worker Rich Bates for delivering this heirloom.....and a good story!