Like many other current and past Chadron residents, Ron Grover of Wichita, Kan., did not know that Chadron native Bill Hallsted wrote Western novels until he read the information in Hallsted’s obituary following his death on May 11. 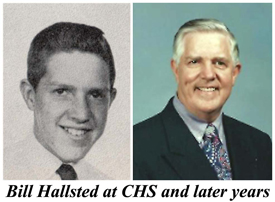 After discovering Hallsted’s “other life,” Grover began reading the novels, which are published using the pen name of Billy Hall. So far, Grover has read seven of the 39 novels and gives them a “thumbs up.”
“Author Billy Hall reminds me of the books by Zane Grey and Louis L’Amour,” Grover related in a message to a friend in Chadron last week.  “I guess without a trained mind for identifying authors, if I was to start reading a book without knowing who the author was, I might not be able to tell someone which of these three authors had written the book.”
Hallsted and Grover became acquainted in the late 1950s after the Grover family moved to Chadron.  Grover’s father, Oscar Grover, was the pastor of the Chadron Church of Christ which the Hallsted family attended.  Hallsted graduated from Chadron High in 1957 and Grover in 1959.
Both men became Church of Christ ministers and served in those capacities until they retired. Hallsted and his wife Arlene had lived in Hot Springs five years before he died of cancer. Among he novels Grover has read are “Bull’s Eye Stage Coach,” “Soft Soap for a Hard Case,”  “Kaycee Killer,” “Easy Target,”  “The Ten Sleep Murders,”  “The Lodge Pole Lynchings” and  “Montana Rescue.”
“There are passages in Billy Hall’s writings that describe the landscape in colorful words that ring true to a reader that has seen such a scene in our Western states,” Grover said.  He offered this example from “Soft Soap for a Hard Case.”
“Towering thunder-heads lifted above the distant mountains.  Stark white at the tops, they grew increasingly dark as they neared the ground, forming a solid black wall that blocked out everything behind it.”
Grover noted that like many westerns novels, Hall’s books seem to include a good guy, one or more bad guys, a pretty lady and some gun play.
“If the hero is the same guy from book to book, as is Levi Hill in many of Billy Hall’s books, the character has to be true from book to book,” Grover stated  “I didn’t find any flaws in this matter; Levi Hill was true to his background and character from book to book.
“I have really enjoyed reading these books and would recommend them to anybody who likes a good, clean western,” Grover concluded.
Hallsted, who was the pastor at 11 churches in five states during his more than 40 years in the ministry, wrote much more than western novels.  His byline appeared on more than 200 articles in that were published in 77 Christian and secular magazines, he had three Christian novels published and also wrote a book about the joys and trials of raising a son with disabilities.