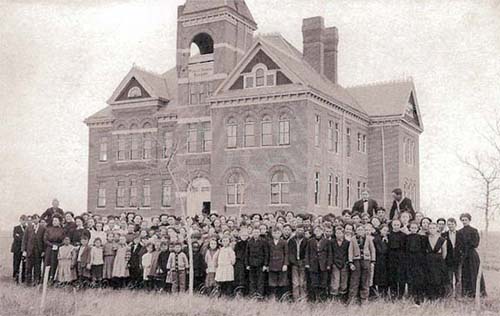 According to the Souvenir Book published back in 1961 when Crawford was celebrating its 75th anniversary, the first known school building in the community was a frame structure "somewhere between the L.B. Murphy Store and the City Hall" in the downtown area.  Then, in about 1890, some five years after Crawford was formed, work was begun on the brick building shown above.
As sometimes happened in the late 19th century, there was something of an "Indian scare" on Christmas Eve of that year, and citizens from Crawford and the surrounding area took refuge in the unfinished building. Windows were boarded up as they "waited for the attack that never materialized."  Local lore has it that some of the students resorted to wearing loaded guns to classes — at least until the principal put an end to the practice.

The building was completed in 1891 at a cost of $25,000.  The school remained in service until 1928, when a new building was constructed.  At that time, this fine old structure began service as an elementary building.  Some three decades later, "the need for more room for the grade pupils became apparent and the old 1891 brick building with all its inadequacies…was torn down."  A new elementary school would take its place.

Students and faculty assembled for the above early photo of the old high school, probably taken in the 1890s.
(Photo courtesy of the Crawford Historical Society & Museum and the Nebraska State Historical Society).