Ward baseball honorees from 60 years ago 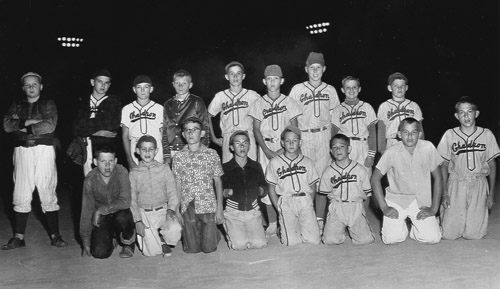 This mid-1950s photo of "Joe Webster Memorial Award" recipients was sent to us by Bob Russell of Sun City West, Arizona. Many thanks, Bob!

The award was named for long-time Chadron resident and staunch supporter of the Ward Baseball program Joe Webster, who was in a leadership position at the First National Bank for many years.  He also was coach of the Ward 4 team.

All but one of the boys in this photograph have been identified.  Perhaps you'll recognize him — he's the third boy from the left in back.  Let us know if you can identify him, have corrections, or can shed light upon the "J.V. Memorial Award."  Just drop us an e-Mail.  Thanks!

To get a closer look at these youngsters — and see the award letter sent to Bob Russell by Arnie Engel of the First National Bank — take a peek at our Dawes County Journal Baseball Photo Gallery.  And thanks to Jim Sandstrom of Mountain View, California, for helping us nail down further information about the Joe Webster Memorial Award.