Crawford grads were honored on cusp of "Crash"

In the spring of 1929 – a few months before "Black Tuesday" (October 29) and the onslaught of the massive stock market crash that ushered the Great Depression – it was happy times for the graduates of Crawford High School. Their achievements were recognized and celebrated.  The Crawford Tribune ran this huge display ad from local businesses, congratulating the new graduates.  It listed a few business and family names that linger today – and many more that are unknown to newer generations. 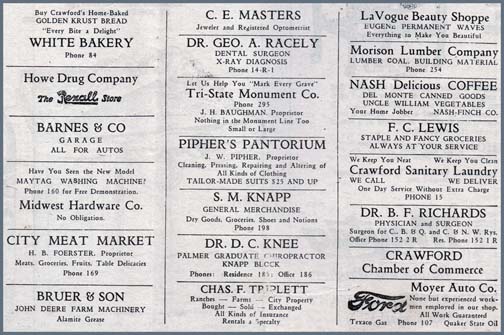 Bruer & Son was started in 1915 by John Bruer, born seven miles west of Crawford in 1891 and whose family moved to town in 1910.  As a teenager, he and friend Walter Forbes reportedly traveled the world in 1910-1911 before returning to Dawes County to work on various ranches.  In 1915, he started Bruer & Son, the John Deere implement dealership in Crawford.  The following year in Omaha, he married Pearl Dolen.  They would raise two sons and a daughter.  John Bruer was president of the old Tri-State Fair Board for many years and helped organize the Crawford Rodeo.  He was a fireman, served on the city council and school board, was a Rotarian, and pursued other civic interests.  While he died in 1959, Bruer & Son implement continued to operate for many years and was among the oldest continuous businesses in Crawford well into the latter half of the 20th century.

Dr. B. F. Richards practiced medicine in Crawford for 46 years.  Born in Ohio in 1874, he went to medical school in Kansas City before moving to Crawford in 1903.  He and his wife, Emma, were active in civic affairs.  Not only did he serve as mayor of Crawford for many years, he was president of the Chamber of Commerce and served on both the city council and the school board.  He retired in 1949, the same year that his wife died.  Dr. Richards moved to Arizona to be near his daughter, Wanda, and her family.    He died in the 1950's and was buried beside his wife in Milford, Ohio.

We're sure that there are interesting stories behind all of these businesses – and many others, too.    Perhaps we'll unearth more down the road.  Our thanks to the folks who put together the 1961 Crawford "Souvenir Book" for its 75-year celebration.  Most of this information came from that publication.  For a peek at a few other early day Crawford photos, visit our Early Crawford Area Gallery.