The Chadron Hested Store – a part of yesteryear


As a kid growing up in Chadron in the years following World War II, we had some favorite places in downtown Chadron.

Now, we're talking about those years BEFORE adolescence dictated visits to the soda fountain at Saults Drug or Thompson Drug to hang out with other teens – all trying to impress members of the opposite sex while enjoying the latest flavored Coke or malt.  And certainly before later teen years at the Sun, trying to win at the pinball machine without a "Tilt."

Of course, if movies at the Pace Theatre were involved, that called for a stop up the street – movie ticket stub in hand – to the Newsy Nook for some candy.  From Licorice Snaps and Cinnamon Bears to Bit-O-Honeys and Big Hunks, it seemed that Mame Finney and Phyllis Wagner had just about anything we were looking for.  And even though it required some budgeting (after all, we couldn't afford everything!) we could still make do with 11 cents.

The quarter allowance on Saturdays would handle the 14 cents admission fee to the theatre, leaving all of those remaining 11 cents to pick-and-choose some treats from Newsy Nook.  And it seemed to be enough.

But perhaps as popular as any business in downtown Chadron in those years was the Hested Store.  It was a "five-and-dime," but we always called it Hested's, not to be confused with O'Banion's dime store just across the street on second and Main.  Hested's not only had a variety of candies – they had hot peanuts and an assortment of other nuts, too!  That provided a bit of nourishment while browsing through the toy section.

The Hested store was pretty good sized and offered everything from housewares and jewelry to greeting cards and clothing.  I recall they even had an assortment of bicycles – but perhaps my memory is playing tricks on me.

Illinois-born Edward James Hested was in his 30s and operating a general merchandise store in Lake City, Iowa, before opening his own variety store in Fairbury, Nebraska in 1909.  He sold a little bit of everything.   Two years later, he expanded into several other southeast Nebraska communities.  By 1940, there were about 40 Hested stores doing business in Iowa, Wyoming, and Nebraska – later expanding into Colorado.  Hested Stores were our heartland version of Woolworth and Kresge stores that populated much of the rest of the country. 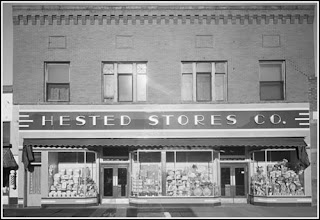 In 1960, according to the Nebraska State Historical Society, there were an estimated 100 Hested-affiliated stores in nine states.

Shown at right is an undated photo of the Hested Store in Laramie, Wyoming, with a store front very similar to the one in Chadron. Hested Stores merged with the J.J. Newberry Company of New York that year.  When the Newberry stores were bought by a Dallas corporation in 1972, the old Hested stores started shutting their doors.

We don't know for sure exactly what year the Hested Store opened and closed in Chadron.  But we do know it was a downtown mainstay for several decades, employing lots of people over the years, and offering small town folks lots of discounted merchandise – including those hot peanuts!