Con Marshall is "Chadron Citizen of the Year"

Lately, we've been proudly posting several articles penned by long-time good friend Con Marshall.  We can't begin to count the many blessings that Con has bestowed on us and so many other people in Chadron and across western Nebraska.  He and his wife, Peggy, are class acts.  So it came as no surprise when Con was selected as the 2010 Chadron Citizen of the Year.  CSC's Justin Haag wrote the following item that has been sent out to friends of Chadron State College.
~~~~~~~~~~~~~~~~~~~~~~~
Jan 5, 2011 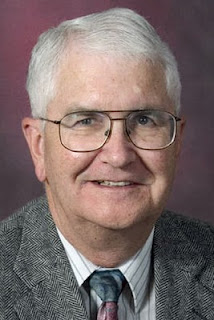 Con Marshall, Chadron State College’s former director of information services and sports information, was named the Chadron’s 2010 Citizen of the Year by the Chadron Record newspaper this week. The announcement was made in Wednesday’s edition.

The article contained testimonials from many of Marshall’s friends and acquaintances, who pointed out the longtime journalist’s knowledge of northwest Nebraska history, commitment to quality reporting and loyalty to Chadron and its sports teams.

“Marshall has worked tirelessly over the years promoting Chadron and Dawes County and the people who call the area home,” she wrote.

Marshall directed CSC’s information services efforts for 36 years ending in 2007. Since stepping down from that role, he has continued to work as an information officer at CSC, completing a number of special projects for the college. One of the projects is a history book about the institution’s first 100 years which will be published later this year.