Back in the 1950's, young Chuck Mitchell took paintbrush in hand and affixed images of well-known cartoon characters to the walls of the newly-constructed snack bar inside the old Pace Theater in Chadron.   It certainly dressed up the snack bar, and helped gain some recognition for the multi-talented Mitchell.  Years later, with wife Vonie Van Natter, those artistic talents were carried on through twin sons Clark and Charles Mitchell.  And as fate would have it, even the next Mitchell generation exhibit those same creative traits.  Thanks to veteran writer Con Marshall for sharing the following story with us.  Thanks, too, to the crew that puts together the Chadron State Alumni Magazine, where this feature recently appeared.
CSC senior returns from a year in Italy
By CON
A Chadron State College student is back on campus this fall after having what she calls “a very special experience” during the 2009-10 school year. 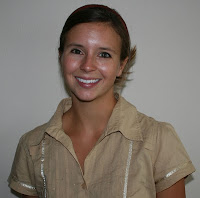 Melissa Mitchell, a senior from , , spent 12 months in in the International Students Abroad program. She studied both semesters at the of the Arts, earning credit toward her humanities minor. She also traveled extensively in western Europe.
“I learned a lot, traveled a lot and met people from all over the world,” said Mitchell, who is majoring in English education at CSC. “I had a really good time. There are some things I would do differently if I could do them over again, but it was a great experience.”
Mitchell admits that she’s adventurous. Otherwise, she says she probably wouldn’t have enrolled at after graduating from high school in 2005, even though both of her parents, Charlie and Sheila, are CSC graduates and her great uncle, Wayne Van Natter, lives in Chadron.
She was one of 70 participants in the ISA program in , but she was one of just two who took part two semesters. Most of the students were from the , but there were others from around the world.
The classes she took were taught in English, but she was forced to learn Italian, particularly the first semester when she stayed in a home in which neither of the parents spoke English.  Their two sons, who are in their 20s, served as interpreters until Melissa had learned enough Italian so she could get by with it.
She said she can now read and write Italian quite well and can speak it rather fluently after having no background in the language when she went to a year ago.  She hopes to retain the skills she learned, and plans to use Skype, an internet voice and video service, to communicate with the friends she made during her adventure.
Mitchell said there are two things she did a lot of during the past year that she no longer wants to do. They are riding on trains and taking pictures.
“I went everywhere by train,” she said. “It is good way to get around over there because it is convenient and cheap. I went all over and saw much of , , and by train. I also took pictures wherever I went. I probably took at least 200 on every trip. By the time I came home, I was tired of riding on trains and I’m not taking any more pictures for a while.”
Mitchell often rides a bicycle to get around Chadron and bought one in . However, she seldom used it because she felt safer walking. She explained that the area near the university she attended is crowded, the sidewalks are narrow and the automobile traffic seemed unorganized and potentially dangerous for a bike rider.
Most of the buildings in the main part of are made of stone and are only inches from one another, she said. Since the city is in a valley, it is hot in the summers. But she escaped much of the heat the last three months by serving as the nanny and English tutor for a seven-year-old girl whose well-to-do parents have a villa on the .
“She and I stayed there most of the summer while her parents worked in .  They would come to the villa to see us on weekends,” Mitchell explained. “We had a good time together. English is the fourth language she is learning.”