Warming up in Sun City!

Chadron area folks living in Arizona routinely gather every winter to socialize and share memories of years gone by.  And Chadron State College coordinates an alumni gathering at around the same time.

It's a great opportunity for "expatriates" to get together.

And even with the cooler weather that swept across the southwest this winter, it still beat the sub-zero temperatures back in Dawes County Nebraska!

Mike Smith has been attending these gigs for several years -- I think since he decided that the ice of Minnesota wasn't nearly as accommodating as the warmer climes of Arizona.  Thankfully, he's alway had a camera along for the event and has kindly shared a few snapshots from the latest gathering.

That was at the Sun City Country Club and Golf Course, the same locale as the 2010 gathering.

But we saw a few new faces this time.  Although I believe he's attended previous gatherings, we hadn't seen photographs of one-time Chadron Eagle editor and cheerleader Ted Turpin.  Even with the hat hiding his hair (we remember curly locks), we were pretty sure that was Turpin. 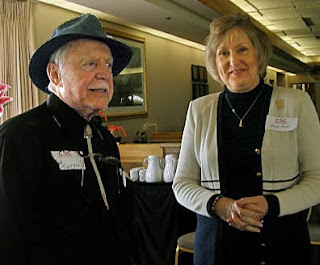 Although emigrating from Nebraska to the southwest several decades ago, Turpin continued his journalistic activities and was a newpaper publisher for many years in Arizona.  Of course, there were lots of other folks at the event, too, along with the familiar faces of Chadron State College folks, led by President Janie Park.  We saw pics of Connie Rasmussen, Karen Pope, and Brad Smith, too.

You might enjoy taking a tour of the photographs we've posted in our  "Arizona Gallery" from this and earlier Chadron meetings in Arizona.  And thanks again to Mike Smith for sharing!

We always enjoy getting glimpses of these folks when they gather -- and share stories.  We had the good fortune to participate in the 2005 gatherings.

After the icebox experience we've had this winter in South Dakota, we may be signing up to attend the CSC Arizona events in 2012!