As Chadron celebrates its 125th anniversary this summer, there’ll be an abundance of school reunions. It'll be an opportunity to rekindle many memories -- including those of teachers at Chadron's three high schools through much of the 20th century. If you have photos or information about teachers of this era, please E-Mail us. Thanks!
~~~~~~~~~~~~~~~~~~~~ 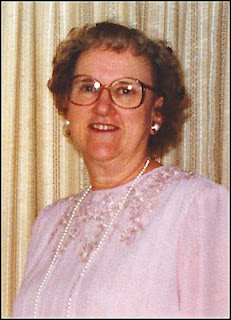 Since leaving Chadron in 1964, she and husband Ron have lived in Lincoln, Nebraska; Tucson, Arizona; and Columbia, Missouri. They also did a stint in Colombia, South America, where her husband took a two-year assignment with the University of Nebraska. Many folks may well remember Elaine’s husband, Ron, who served several years as the Dawes County Extension agent. We recall crossing paths with him at KCSR Radio, when he would come in to record a weekly radio program.

The Stollers have two daughters – both born in Chadron. Daughter Carol is a nurse and works in Health Administration with Kaiser in Los Angeles; Diane is a general surgeon at Abbott Hospital in Minneapolis. They have five grandchildren.

Recalling her teaching years in Chadron, Mrs. Stoller remembers one incident very vividly. It seems the Phys Ed class was outside playing and “all at once…they put down their equipment and walked off the field to the locker room. I had no idea what was wrong, so I quickly followed them and to my surprise, they had planned a baby shower for me in the locker room. I was pregnant the last semester, and the first pregnant teacher to teach at the high school. Times have changed!”

Then there was the time that the varsity basketball players – just boys back in those days! – taught and coached the girls basketball classes. "As I look back on my years of teaching at Chadron High and remember the wonderful students and experiences, I always thought the students at Chadron could be better disciplined -- but learned after teaching in many other schools that those Chadron students were almost perfect compared to most other places!"
Mrs. Stoller recently spent six months in the hospital, a rehab-center and nursing home following a fractured femur and knee replacement. We’re happy to report, however, that she’s back home now! The Stollers are at home in Las Vegas, Nevada.