There were few teams that could keep pace with the basketball squad at Chadron Prep during the decade or so before the high school closed its doors in 1961. The Junior Eagles won state championships in 1950, 1952 and 1955 under the legendary Archie Conn. Those teams were also undefeated. 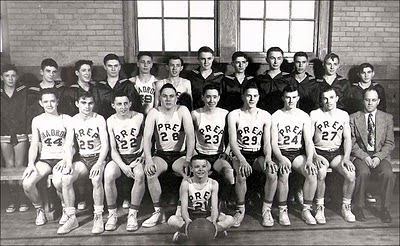 Names like Kuska, Hampton, Lytle, and Muma still conjure up images of a stellar group of players that few teams anywhere in Nebraska could keep pace with. Jim Hampton was a starter with the 1951 squad -- shown above in a photo that Jim has kindly shared with us. Sitting on the floor in front of his teammates, the 5'2" Hampton looks almost like a team ball boy -- a perception quickly dispelled once the half-pint hoopster took to the floor. He was just a freshman, and he did grow to a "towering" 5'5" by his Junior year.
Dr. Jim Hampton is now retired from Dow Corning. He and his wife, Shirlee (Durham), live in Midland, Michigan.
Jim provided us with this key to the above photo: standing (left-to-right) are Ervin Horton, Jim Forbes, Allen Livermont, Bob Buchanan, Franklin Clark, Pete Woods, Duane McMeekin, Dale Webster, Tom Hoffman, Jim Neeland, John Kent, and Ken Woolery; seated (l-r) are Jim Palmer, Curt Roberts, Bob Armstrong, Bob Allgood, Charlie Muma, Larry Lytle, Les Churchill, Wally Goff, and Coach Archie Conn. Jim Hampton is in front. To take a closer look at this photo -- along with others -- visit our Chadron Schools Gallery.
Just a note about Archie Conn. From his days at Chugwater, Wyoming, until he chalked up an impressive 247-33 career record at Chadron Prep, Archie Conn was a coach who seemed to know how to get the most out of his players. When Prep closed, Archie remained at Chadron State for a few years before taking a job teaching education courses at the University of South Dakota-Springfield, where he retired in 1972. He died in 1984.
It was our pleasure to interview Archie Conn in 1976 after he had moved back to Chadron. That was the year he was presented with the Distinguished Service Award from Chadron State College, a well-deserved honor for a remarkable career dedicated to young people and their education.