A walk in the woods

During a late night Skype conversation with brother John in San Diego this week (5/23/09), he shared the news that a 4.7 earthquake had shaken central California east of Fresno earlier in the day.

This bit of natural disaster news got me to wondering: whatever happened to King’s Chair, the huge boulder that once sat atop one of the pine hills just south of Chadron State College? Did tremors from an earthquake cause it to roll down the hill and crumble into pieces? Was it viewed as a safety hazard and demolished to keep some wanton waif from falling off and cracking his head open? Or, perhaps time simply weathered it down bit-by-bit, and my aging eyes just can’t discern it anymore?!

These are some of the grave questions I occasionally ponder whenever I’m thinking about Chadron or heading back there for a visit. Since I wasn’t able to see the landmark when last I visited Chadron, the above questions started percolating in my mind. I simply refuse to believe that my wits have teamed up with my vision and have taken leave of my body……but that’s probably more plausible than the other possibilities.

Lots of Chadron kids used to trek around in those hills – and perhaps still do, although many homes, including those in “Hidden Valley,” have encroached upon much of the terrain.

John and I enjoyed reminiscing about a few noteworthy places scattered through those hills. There was Koske Dam, Sacrifice Cave, Blue Rock Cave, and another some of us used to call Paradise Valley. 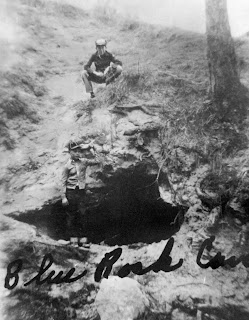 One of my buddies – I don’t know who – snapped this photo more than 50 years ago at the entrance to Blue Rock Cave. Lawrence Denton is atop the cave, and I’m next to the entry. Alas, that might’ve been my final encounter with Blue Rock Cave, since my attempted pilgrimage back to the cave some years later was a real bust. In the late 1970s or early 1980s, I was going to show my son one of “my special places” where I played as a kid. Kind of a “rite of passage” thing. So we put on our hiking shoes and headed for the hills. Two hours later, we had traipsed over C Hill, scaled King’s Chair, hiked to the “new” water tank, and visited what I remembered as Paradise Valley. Sacrifice Cave was beyond my endurance, so we didn’t even try that.

But the centerpiece of the hike was to be Blue Rock Cave. We covered a lot of ground that day, but we (I) never found the cave. I suspect my now 41-year-old son wonders if there really is such a place – or ever was.

Let the above photo serve as evidence that there really was such a place – and I was there! Unfortunately, my stint in the Junior Forest Rangers Club was brief, and my navigational skills slipped away over the years, and Blue Rock Cave was never again found – by me, anyway.

Perhaps I’ll take a GPS unit next time. At least I’ll know where I am when I don’t find the cave.