Andrew Carnegie to the rescue 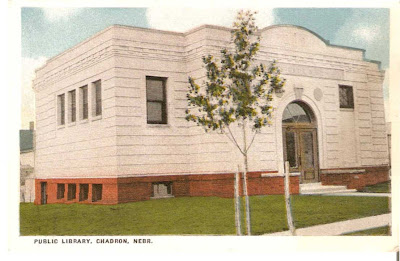 While rummaging through a box of old photographs and letters belonging to an aunt who lives in Wyoming, I happened across an unused postcard emblazoned with this image of the Chadron Public Library.

~
Built in 1912 at 512 Bordeaux in Chadron, its design is comparable to many libraries across the country that were funded in whole or part by Andrew Carnegie. A wealthy industrialist from Scotland, his successful steel business in Pittsburgh eventually evolved into U.S. Steel. He was responsible for more than 3,000 libraries across the United States alone -- others were in Canada, Scotland, Australia, and elsewhere.


Like other recipients of Carnegie's benevolence, Chadron had to provide both a site and ample operating money for the facility, which they've done over the years. The library had a major renovation in 1964. As it approaches a century of service, the Chadron Public Library seems to be a busy place, according to its web site, but I find no reference to the initial cost of the structure.


Alas, I wish I'd spent more time there as a kid. Growing up only about four blocks from the library, it would have been an easy walk. I suspect I spent more time in the Chadron State College library during my freshman year at the college than I collectively spent in in the public library while attending East Ward, Junior High and Chadron High School.


The postcard shown here was created by Bloom Bros., Inc. out of Minneapolis, Minnesota, and when created, it required only one penny to send the card anywhere in the United States. I like the rather "painted" style used in colorizing the image -- a fairly common practice after the turn of the century.