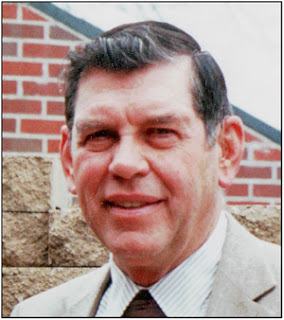 Gib was born July 16, 1931 in Lincoln, Nebraska, the son of Curtis and Naomi (Gilbert) Wilson.  In 1942, the family moved to Chadron where he graduated from Chadron Prep in 1949.  He attended Chadron State College for three years.  In October 1952 he enlisted in the U.S. Air Force and entered the Aviation Cadet program.  He graduated in November 1953 with his wings and a commission as a 2nd Lt.  He married Delores "Dee" Lind on November 21, 1953.   They had met at Chadron State College.  They moved to Las Vegas where he attended gunnery school at Nellis AFB before a tour of duty in Korea and Japan.  He was assigned to the 336th Fighter Interceptor Squadron at Kimpo, Korea, where he flew the F-86.  Upon returning to the States, he was assigned to the 1st Fighter Day Squadron at George AFB at Victorville, California, where he flew the F-100.  He and Dee lived in Adelanto, which was near the base.

Upon his release from active duty in November 1956, they returned to Chadron where he finished his BS degree in Math and Physics in 1958.  He was awarded a teaching assistantship in the Math department at the University of Wyoming, where he received his MS degree in 1960.  In his 31 years of teaching Math, he held faculty positions at Western Wyoming College, North Idaho Junior College, University of Idaho, and Blue Mountain Community College.  He finished his teaching career at Central Wyoming College at Riverton, where he attained the rank of Professor and was awarded the title of Emeritus when he retired in 1991.

Gib and Dee lived on a small farm near Riverton for 17 years.  In 1994 they moved to Sundance, Wyoming.  He and Dee ran a cow/calf operation for several years, then sold the cattle so they could travel.  He was a member of the National Council of Teachers of Mathematics, the Mathematical Association of America, Life member of the National Rifle Association, and the F-86 Sabre Pilots Association.  He served on the Board of Directors of Crook County Senior Services for nine years and the BLM Resource Advisory Committee for three.  He enjoyed hunting, reloading, fishing, camping, and traveling.

He was preceded in death by his wife Dee, his parents, and his brother Larman.  He is survived by three daughters, Judy Neal of Casper, Wyoming, Linda Fleming of Thornton, Colorado, and Shirly Hardeman of Costa Mesa, California; his brother Douglas, four grandchildren, and one great-grandchild.

Memorials may be made to the Crook County Senior Services or the Naomi J. Wilson Memorial Scholarship at Chadron State College.

Gib will be laid to rest at Black Hills National Cemetery on Friday, September 10, 2021.  A memorial service will be held on Saturday, September 11, 2021 at 11:00am at the Sundance United Methodist Church.  Arrangements are under the care of Fidler-Roberts & Isburg Funeral Chapel of Sundance.

Online condolences may be written at www.fidler-isburgfuneralchapels.com.