Long-time evangelist from Chadron dies at 92 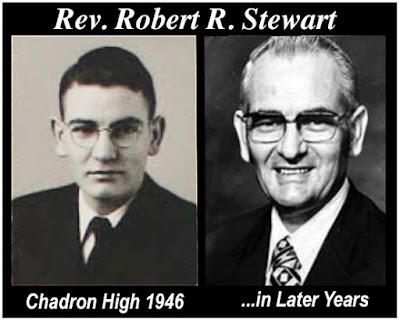 by Con Marshall
A Chadron native who spent 35 years as a Christian missionary in Thailand, the Rev. Robert (Bob) Stewart, died June 6 at his home in Anniston, Ala., at age 92.  He was a 1946 graduate of Chadron High School, where one of classmates was Dr. Allen Alderman, long-time Chadron family physician, who died June 1 in Rapid City.
Shortly after graduating from high school, Steward enlisted in the Army. Following his discharge, he graduated from Howard College (now Samford University) at Birmingham, Ala., and New Orleans Baptist Theological Seminary.  He pastored churches in Alabama from 1949 to 1958. He and his wife, Maxine Ashburn Stewart, were appointed by the International Mission Board of the Southern Baptist Convention to serve in Thailand in 1958.
With their three children, they went to Thailand that year and were there until their retirement in 1994.  During his tenure, he was a field evangelist, church advisor, hospital chaplain, preacher, seminary teacher and author of Thai language books, gospel tracts, Bible study lessons and a church newspaper.
After leaving the mission field, the Stewarts lived in Anniston, where he was a Sunday school teacher at the Parker Memorial Baptist Church and spoke at more than 100 churches in the South.
In a letter to a Chadron friend in 2020, Stewart noted that he was a Chadron State College football fan dating back to 1938, when his father, a barber, took him to the Eagles’ letterman’s dinner.  He noted that he played right tackle for the Chadron High football team in 1945, and while they were in Thailand his wife gave him a subscription to USA Today as a birthday present to help him keep tabs on American sports, including Chadron State and the Cornhuskers.
From 2009 until her death in 2017, Stewart was his wife’s full-time caregiver. He also was preceded in death by his parents, Robert E. Stewart, and his mother, Sybil Stewart Gay. Survivors include his brother Bruce of Kearney and sister Joan of Omaha, along with two daughters, one son and several grandchildren and great-grandchildren.

(Editor's Note:  Thanks to Con Marshall for providing this story.  Photos in the above composite are from Chadron Public Schools and the Anniston Star, Anniston, Alabama.)