The above named gentleman is one of the prominent old-timers of Dawes county, Nebraska, where he has materially aided in the growth of that region. Mr. Macumber is familiarly known as "The Headlight of Bordeaux," the cognomen which was applied to him through the Alliance meeting. He is a warm friend and admirer of James C. Dahlman, the "cowboy mayor" of Omaha, with whom he became acquainted when he first came to this country.
Mr. Macumber was born in Gallia county, Ohio, on April 8, 1852. His father, J. A. Macumber, was also a native of Gallia county, and died January 23, 1907, having settled in Madison county, Iowa, in 1853, when our subject was but one year of age, he having been a twin, and one of a family of eight children by the second marriage of his father who also had four children by a first marriage. The homestead in Iowa where they lived for many years is still owned by a nephew, Emory Calison, and it was there that the children all grew up. There John learned to do all sorts of hard farm work and assisted his parents in building up a good home and farm, going through pioneer experiences when they were obliged to suffer many hardships and privation, handle ox teams, etc., and at the age of twenty-one years started in for himself, following farm work. He owned a two hundred acre farm there, and went through the panic of 1873, coming out of the trouble in very good shape financially. 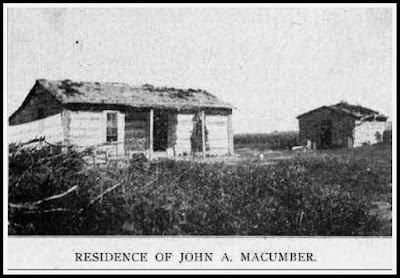 In about 1886 Mr. Macumber came west, arriving in Dawes county in the month of March; went back to Iowa, sold his farm and returned with his family on the 8th of April 1886. They located in section 34, township 34, range 48, on Bordeaux creek, this stream also running through his land. He has plenty of natural timber on the place, and ninety acres is irrigated, on which he raises fine crops, and in all has one hundred and fifty acres under cultivation.
The ranch consists of eight hundred acres, and is well supplied with good water, wild fruits, and he has many acres of good hayland and grass for pasture. The first dwelling put up on the farm was a dugout in which they lived for one year. The dry years followed soon after he located here and many were the losses and discouragements they experienced, and also in 1890 and 1891 they were occasioned much discomfort and anxiety through the Indian uprisings throughout this part of the state, but no one was injured. During the first years here he broke up all his land and did all the farm work with the help of two yoke of oxen, and used these faithful animals for five years. The ranch is now all fenced and well improved, free from all indebtedness, and he has one of the valuable pieces of property in the county, and a comfortable home. 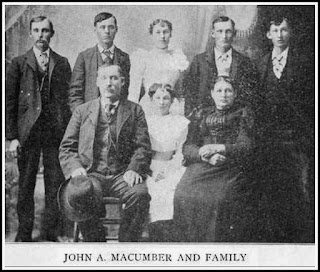 Our subject was married while living in Iowa, April 20, 1873, to Miss Melissa Shearer, a native of Indiana, who settled in Illinois, when a girl, with her parents, and in 1866 they moved to Iowa where they were among the pioneers of Madison county. Mr. and Mrs. Macumber are the parents of five children, named as follows: William H., Edward A., James W., A. Jr., and Alida G., all married except John A. Jr., who lives in South Dakota. James W. also lives in South Dakota. The balance of the family live in Dawes county, Nebraska.
Mr. Macumber is a stanch Democrat, inclining strongly toward Socialism, and has always worked along reform lines and been closely identified with all reform movements in his section for many years. He is a man of superior intelligence and progressive ideas, and one of the foremost citizens of his locality. A picture of the residence and family will be found on another page.
~~~~~~~~~~~~~~~~~~~~~~~~~~~~~~~~~~~~
Editor's Note:  The biography and photos above were included in the illustrated 1909 publication "Compendium of History, Reminiscence and Biography of Western Nebraska" printed by the Alden Publishing Company of Chicago.
-- Larry Miller