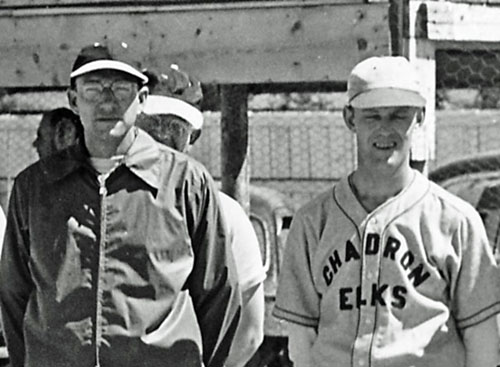 Rummaging through some memorabilia recently, we came across a photo of what was labeled as the 1950 Chadron Elks baseball team.  We have a few team photos from those years – but none that has shown together the two stalwart pitchers who brought great strength to the Elks in their heyday years.

Above at left in a warm-up jacket is Ed Puck.  Next to him is Andy Anderson.  Peeking over Puck's left shoulder is long-time team manager Paul Rhodes.

A few years ago, Con Marshall penned a story featuring Andy Anderson, but also providing a bit of information about Ed Puck.  Old-timers well remember both these fellows, especially Andy Anderson, who has called Chadron home for many years now.

Con has graciously allowed us to post his story.  It's originally dated 2014, but it's a timely story we think you'll enjoy.  Just click on the link below:

Chadron southpaw finally gets to throw out ‘first pitch’