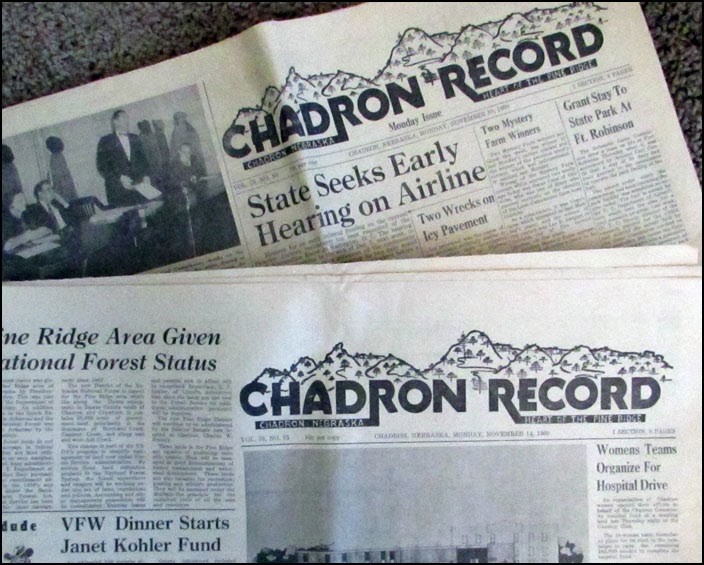 Those of us who are a bit more fickle about the weather than most folks sometimes find it desirable to escape southward during winter -- for at least a few weeks.

So when Karen and I packed for Arizona in late December, I grabbed a stack of old Chadron Record newspapers to read the "breaking news" from the 20th century -- some of them from 1959 when our town was battling with Frontier Airlines over their twice daily flights in to DCI (my favorite moniker for Dawes County International just west of Chadron.)

It's likely the November 20th front page story "State Seeks Early Hearing on Airline" was written by Don Huls, Editor and Publisher of the twice-weekly paper, for which subscribers paid 15 cents each.  A yearly subscription would set you back $3.50.  While there were lots of outstanding reporters who worked for the paper during those years -- including folks like Ted Turpin, Bob Bishop, John DeHaes and Con Marshall -- the abiding column that remains indelibly imprinted in my mind was "The Dude," in which Huls would ruminate about everything from the weather and local politics to social affairs and sporting events.

I chuckled when I read about the November 1960 Chadron High-Crawford High football game at which "The Dude" (always a third-person guy) saw something "...that he hasn't seen in many years. After Crawford scored its touchdown in the second period, a Crawford player by the name of Dick Smith dropped back for the extra point attempt and durned if he didn't drop-kick that ball right between the uprights for the extra point."  Huls reminisced that, as a youngster, he saw the legendary Jim Thorpe drop-kick a football from one end of the field to the other as a half-time demonstration at the old Haskell Indian School in Lawrence, Kansas.

Lawrence was Don Huls' hometown.  And it was there that he began his love-affair with journalism, pledging the SDX (Sigma Delta Chi) journalism society while reporting and selling ads for the University of Kansas school paper.  He was a good-looking "Dude," too, as evidenced by this photo.

I first knew of Don Huls when his family moved from Ottawa, Kansas to Chadron in 1957, when he took over operation of the Chadron Record. His wife, Frances, was co-publisher, and would also teach social studies at Chadron High School.  Their children were F.D., Cyndi, and David.

Although I don't remember for which class it was, I do recall Don Huls coming to Chadron High School one day in the late 1950's to share his experiences as a Naval Intelligence officer in World War II. He had witnessed the aftermath and the horrific consequences of the atomic bombs dropped on Nagasaki and Hiroshima.

Huls remained a staunch fan of Kansas University and was known to attempt recruiting a few area football players to try their hands at being Jayhawks.

All of these memories, and a few others that have blurred over time, came rushing back when I saw the online story that the Chadron Record is celebrating 130 years during 2014.  The Record and its predecessors date back to 1884, when Ed Egan settled along Chadron Creek and began his modest newspaper named the Sioux County Journal.  Later known as the Dawes County Journal (our apologies for lifting that old name for this web site) and later the Chadron Journal.

Those were the years when Egan was at odds with the remarkable Fannie O'Linn, who fought hard to maintain the name "O'Linn" as the official name of the town -- even persuading the postal service to adopt the name for the official post office.  Egan, however, "continued to publish his newspaper from 'Chadron,' which met with vigorous opposition from the good Mrs. O'Linn."  And we know who eventually won the fracas.

That's one of the many stories recounted in the Chadron, Nebraska Centennial History (1885-1985), and we suspect that Don Huls -- as one of its authors -- had a hand in that story, too.