There've been numerous physical improvements at Chadron State College over the past year or so.

Among them was the remarkable remodeling of the oldest building on campus, the – coupled with the expansion and remodeling of Sparks Hall, what we used to call the old Faculty Dorm.   Particularly impressive has been the work at , which now houses the office of President Janie Park as well as the CSC Foundation.  The contractors did a fantastic job modeling the addition after the architecture of the original structure.

And while not everyone seems enamored with it, I really like the new entrance to the campus at 10th and . 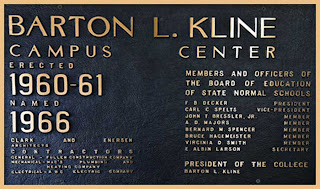 But this piece is about something else.  It’s a belated acknowledgement of the old .  I say “acknowledgement,” since ‘tribute’ would be a bit too much for a building that has had structural problems almost from its beginning.

I spent considerable time in the , first as a student after it was built in 1961 – and later during a short stint on the staff at CSC.  So I have some happy memories of the facility; but in the final analysis, the structure was something of a disappointment.

I’ve certainly not dissected all the reasons for the structural failure of the building.  In fact, I’ve simply chalked it up as illustrative of much shoddy construction work done in the mid and late 1900’s across the country.  At CSC, it was not just Kline – but probably Brooks Hall, too.  Of course, structural rehabilitation and other repairs could help salvage some buildings not quite up to standards, but – in the end – the was just too far gone.

The quality of workmanship of those and many other structures of that era pales when compared to the durable and stately construction of such buildings as the , Crites Hall, and Edna Work Hall.  All of those rock solid structures, built early in the 20th century, remain functioning and vital buildings on the CSC campus as we begin 2012.
Nonetheless, was a new and shining star when it came on the scene.  Its sleek modern design seemed consistent with ’s entry into the space age.  Astronauts had flown in space, and – within the next decade or so  – man would walk on the moon.

As a native Chadron student still living at home, I missed much of the social life in which dorm residents engaged.  That included meals, Cokes, bowling, and related socializing at the .

Returning from the Navy and attending as a married student, my time at Kline was even less.

It wasn’t until 1976, when I joined the CSC staff as Director of Information that I became more intimately involved with activities at the .  While our information office was in the , the photographic darkroom was on the upper level on the south side of the .  I spent many hours there spooling film into 35mm canisters and printing pictures.   It was long before digital photography and personal computers, so developing film was fraught with lots of challenges. That included figuring out how to remove the smell of photographic chemicals from my hands and learning to co-exist with discolored fingernails -- turned yellow by exposure to photo fixer.

Perhaps the most pleasant memories of involved gatherings with other staff and faculty for coffee in something of a faculty lounge on the second floor.  It was there I became better acquainted with the likes of Don Deselms, LaVern Fitzgibbon, Ross Armstrong, Harry Holmberg, Reta King, Tom Detwiler, Gerald Christofferson, Tom Bartels, and many others.  And President Ed Nelson would also frequently join the gathering.  It was a welcome respite in the work day, and it served to help foster a bond amongst the group – something that seems increasingly difficult for college and university folks these days.

For most people, memories of are entwined with their student years.   When the building was leveled last April, Cathy Donohue wrote a nice feature story capturing a bit of the nostalgia that still rings true for many alums of CSC.  She called it Remembering Kline.  The photos used here are courtesy of CSC.