One of the best stories we've heard this holiday season is one broadcast by Des Moines television station WHO-TV. It was told by Erin Kiernan, evening news anchor at the NBC affiliate, and it was a very personal story. It shared the trials and tribulations of Erin's dad, a native and long-time resident of Chadron, Larry Moody. 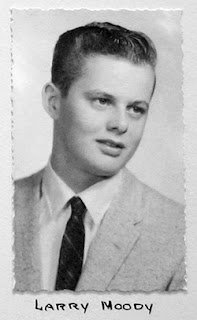 About a year ago, Larry's family was told to prepare for his death. He had suffered a ruptured brain aneurism, and the prognosis was not good. But family, friends, and much faith brought Larry back from the brink of death. It was not an easy journey, but Larry and his wife Cheryl (Haskell) persevered. Larry's multi-month bout with his debilitating condition came just a few years after he had retired from Nebraska Public Power and the Army National Guard in Chadron. He and Cheryl moved to Chandler, Arizona in 2007. He had given up smoking and when his Class of 1960 gathered for a reunion last year, he included "walking, cardio and weight training" among his interests and hobbies.

For the many childhood friends who grew up with Larry Moody and knew his parents -- Kenny and Wanda Moody -- and sisters Nancy and Rebecca and brother Lynn, it was no surprise that they all grew up with a great sense of humor. But it was Larry who inherited that robust and infectious laugh from his dad. How wonderful that his family will enjoy it again this holiday season and, hopefully, many more!  What a heartwarming story this is, for Larry and his family -- and for all of us.

Thanks to Larry and Cheryl's talented daughter,  Erin Kiernan, for compiling a remarkable story, which was broadcast on WHO-TV and was entitled "A Father's Fight."  Unfortunately, as of today (7/3/12) the video link to that story is no longer available.