As Chadron celebrates its 125th anniversary next summer, there’ll be an abundance of school reunions. It'll be an opportunity to rekindle many memories -- including those of teachers at Chadron High, Chadron Assumption and Chadron Prep. If you have photos or information about teachers of the mid-20th century....or earlier....E-Mail us. Thanks.
~~~~~~~~~~~~~~~~~~~~~~~ 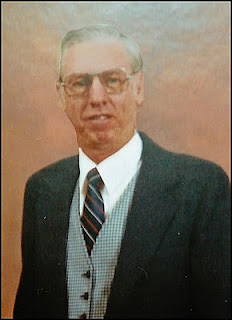 GLENN MASTERS was on the staff at Chadron High School as the Vocational Agriculture instructor in the 1954-1959 period. He then returned to the university in Lincoln on a fellowship to obtain an advanced degree in agricultural economics.
That stirred memories of his childhood as a Garden County farm boy in the 1930s and the suffering that his parents endured through years of severe drought and economic depression. So he was motivated to find a job where he could better use his new skills toward improving the economic and general welfare of rural populations.
His search led him to a career with the Bureau of Reclamation.
“The bureau specialized in capturing runoff from the mountains each year to provide water for irrigation, municipal and industrial needs, and hydro-electric power generation with the releases from storage powering the turbines,” says Masters, who found himself in Grand Island for a couple of years, then the Pacific northwest, and finally Denver.
That’s where his responsibilities put him in touch with all the bureau planning activities for 17 western states.
“I feel very fortunate to have had nearly forty years in public service, including my time in Chadron.”
Glenn and his wife, Dorothy, live in Littleton, Colorado.