We're not talking about the fabled song of the 1950s by the Mills Brothers. We're talking about a family of boys and girls who were widely-known throughout Chadron and the area. This posting is not so much about that Jones family as it is one of a newer Jones generation.

However, to put it in context, it's wise to at least give a frame of reference.

The parents were Dick and Alice Jones. They lived in the Kenwood neighborhood of Chadron. I recall Dick was a mechanic, and in his later years worked for Chadron State College, but I don't believe Alice worked outside the home. She had kids to raise. Lots of kids! An interesting turn of events for a mother who'd been an only child.

Okay, I don't want to overstate it, but there were more than just one or two kids in their family. I think there were eight or nine. In order, probably: Billy, Rosemary, Ross, Rex, Ron, Don, Roger, Janice, and Judy.  (Note:  A kind soul has commented that there were actually eleven Jones kids, and that I overlooked the first and third children, Bonnie and Bob. Thanks for the correction!)  At the risk of minimizing all of this remarkable group -- I'm going to stay in my comfort zone and talk only about the ones I knew a little something about.

Bonnie, Billy, Bob and Rosemary were the oldest. Ross, like most of the boys, was a good athlete and went into the Marine Corps. Rex was, I think, an even better athlete, becoming an outstanding football quarterback at Chadron High School AND Chadron State College. But Ron and Don were superb athletes, too. Don was a guard, Ron was quarterback. I remember Rex, Ron and Don as good basketball players, too. The last of the boys, Roger, was in my class of 1961. Like his brother, Don, Roger played guard and was tapped to play in the 1961 Shrine Bowl Football game. Roger and his wife, Judy, are retired and live in Iowa, but rumor has it that they're headed to warmer climes.

The younger girls were: Janice, who passed away a few years ago, after raising a family and working for many years at Chadron State College; and Judy. I have completely lost track of her.

But on a July morning this summer, near Iron Creek Lake south of Spearfish, I crossed paths with Rex Jones and his wife, Sharon. We were all at this beautiful locale to watch a Triathlon, involving about 120 younger folks who would swim, run and bike through this beautiful northern Black Hills enclave.

I was there because two of my amateur radio colleagues and I had agreed to provide communications for the event. Bob Weaver and Don Matthesen are veterans at this sort of thing. As perhaps one of the most inactive "ham" operators in the country, this was just my second time at this event. While Don and Bob went to the mid-point of the Mountain Bike ride, I remained near the finish line. 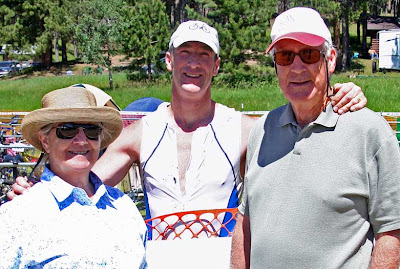 So, that's a long prelude to introduce a few pictures we took at Iron Creek Lake, mostly of Rick Jones, but there are some others, too. They're posted here, because, even if you've never met Rick Jones, if you remember those Jones boys of Chadron, you'll quickly identify Rick as a relative.

Editor's Note:  (10/16/16)  We are saddened to report the passing of Rick Jones, who was featured in this story -- and its associated photo gallery.   Our sympathy to Rex and Sharon Jones and their family.  For a glimpse into the life of this remarkable young man, please read this  Obituary for Rick Jones.