We were sorry to hear that Chadron (Nebr) State College’s Danny Woodhead injured his left knee while practicing with the Jets last week. The NCAA’s career rushing leader, Danny has been placed on the “waived-injured list” after injuring his knee during practice with the New York Jet on Friday (7/25). 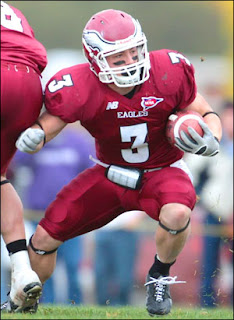 While we don’t know the extent of the injury, Coach Eric Mangini reportedly said that “it’s not looking good for him to be back anytime soon.” Woodhead is a native of North Platte, Nebraska, and helped to put Chadron State College on the map during his four spectacular years on the gridiron for the Eagles. He chalked up some 7,962 yards in four seasons. He won the distinguished Harlon Hill Trophy two years in a row, an honor afforded the NCAA Division II top player.
Nonetheless, we’re continuing to keep an eye on Danny Woodhead. We've always admired his attitude and spirit.
We’re also watching Zack Alcorn, a Chadron High School standout player who went to Black Hills State University for his college play. We’re told that he’s been released by the Seattle Seahawks. He’s another young man with lots of spunk. Whether or not his professional football career as a Tight End is drawing to an early conclusion, we don’t know. But we’re fairly certain that both these young men will do well in whatever they pursue.