(Editor's note:  Many thanks to Chadron native Larry Smith, a 1954 graduate of Chadron High School, for sharing the following story – a fun step back into time!)

~~~~~~~~~~~~~~~~~~~~~~~~~~~~~~~~
by Larry Smith
I attended Chadron schools K-12 in the 1940s-1954.  One memory of the time involves the long time school superintendent, Henry Schroeder.
Henry was a huge man, well over six feet tall and tipping the scales well past 250 pounds, but he was also a very jovial and kind man who was generally well liked by students, faculty and the community.
He would come to watch football practice.  No one could kick a football higher and farther than Henry. We used to joke that when he kicked the ball it came down with frost on it.
When I started high school we didn’t have school buses that delivered students to school.  We did have a school bus that was basically an activity bus for transporting teams to out of town games or the band to out of town parades.  That bus was a 1947 Ford bus with a small V-8 engine.

Henry always drove the school bus, wherever it went.  How many school districts could ever claim the superintendent drove the activity bus?  The old bus was painted Cardinal red with black lettering on the sides that read Chadron High School.
It labored to climb any hill.  Driving south with a full bus of football players to a game in Hemingford I remember Henry telling us all to blow towards the windshield to help get the bus up the hill to the table south of the state park.
The old red bus was noisy to ride in and on cold days very underheated.  You could see  your breath on some trips…inside the bus.
In the summer of 1953 the school board purchased a used Greyhound bus to be used as the activity bus. Wow, was that a jump in style and comfort.
It was a thing of pride and joy for Henry.  And, of course, he was the only designated driver.
Henry had a daughter in high school, also in the band.  There is a story, for which I can’t verify since I was not a participant, that his daughter, Susan, talked Henry into taking the new bus and the band to the drive in theater on a dollar a carload night.  The band members all breaking out folding chairs to watch the movie on an August evening.
My most vivid memory of the new, luxury bus was the first trip with the football team to Gering, the first out of town excursion for a team and the bus.  It was a very comfortable ride. We rode to Gering, and, alas, lost the game.
On the way home, south of Alliance in the sand hills, the bus suddenly lost power.  Henry pulled to the shoulder and got out with the coaches to inspect the engine.  It was burned up. Apparently the oil drain plug had not been tight, and the engine lost all the oil.
It was a rainy night. The whole team got off and pushed the bus up the highway a few  yards to a wider turnoff on the side.  Someone flagged down a passing semi truck with a flat bed trailer loaded with cement blocks.  The whole team climbed on top of the load, in the rain, and rode into Alliance where we were dropped off downtown at a hotel. There, parents were called, and a convoy of parents in cars came to rescue us.
My wife remembers a trip when Henry was driving the band to a parade, as she remembers, in Sidney. The bus began running poorly, so in some town along the way Henry pulled the bus off to get some mechanical help.  Ward Rounds, the beloved long time band director, got the whole band off the bus, and they performed an impromptu parade while the bus was being repaired.
I am sure other ex Cardinal students have memories of Henry and his bus. 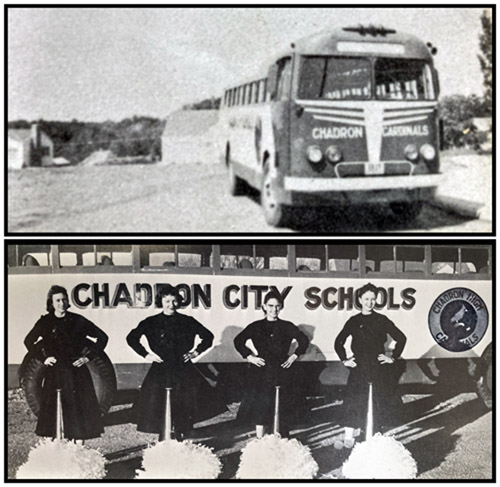 Two views of the used Greyhound "pusher" bus in different years.  Above in about 1953 – below in 1958 – and still functioning!  To see a larger version of this and other photos, along  with more information, go to our:  Dawes County Schools Gallery.